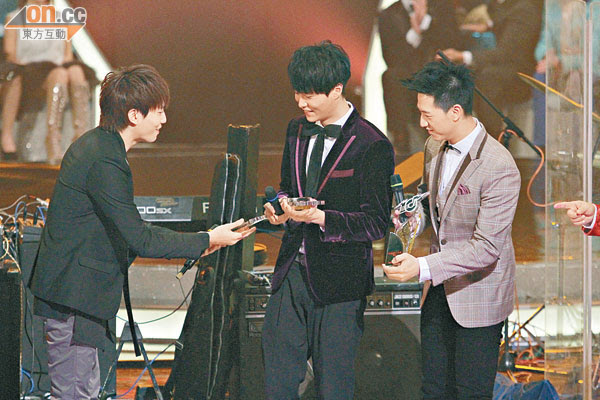 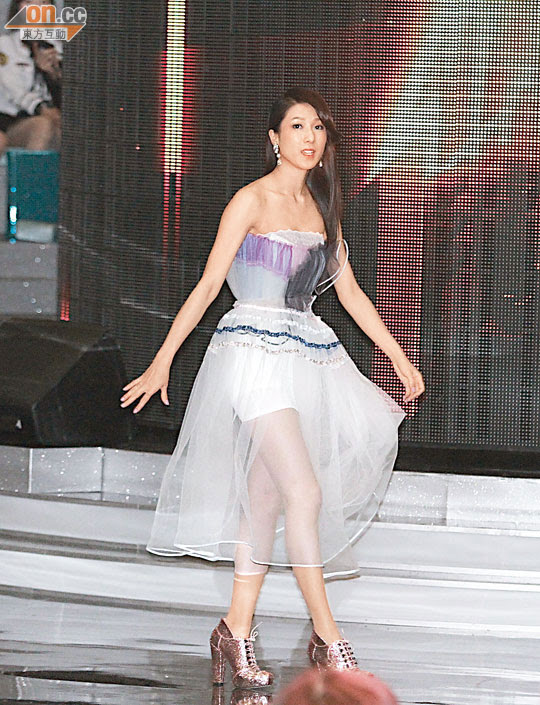 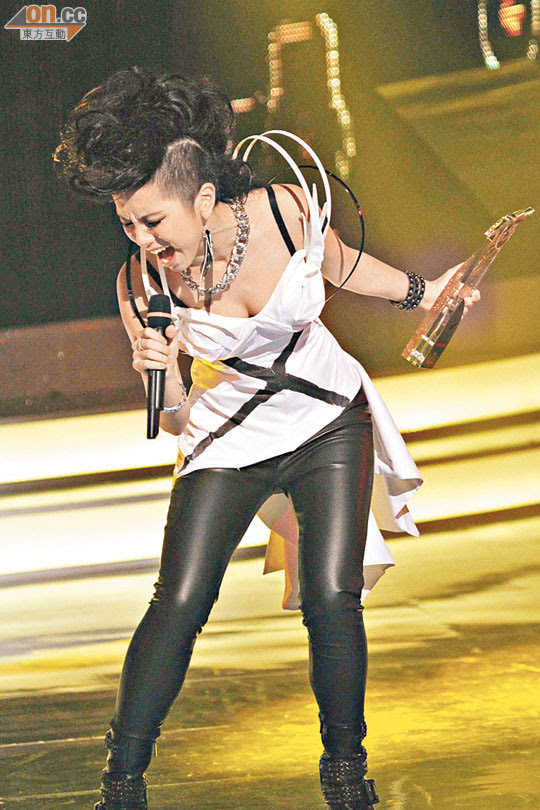 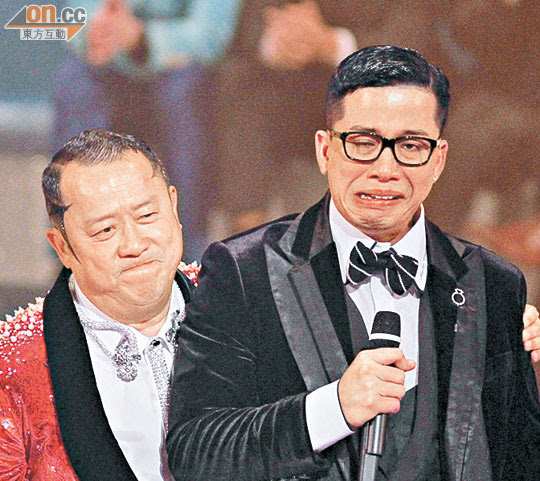 TVB exercised its "no award for absentee" principle, with the unresolved royalty issue with the four major record labels Lam Fung had no competition and avenged his TVB Best Actor general election defeat with his first "Most Popular Male Singer". With his "Asia Pacific Most Popular Male Singer" and "Gold Song Gold Prize" in the past, he finally has won all three major awards as he wanted.

Last night the 3 awards winner Lam Fung said, "I have never thanked my family, this time I have to thank them. I also have to thank my fans. As long as I am still on the stage one day, I would bring the best music to everyone." He already expressed that he would still keep singing. When he accepted the Gold Song Award for NAIVETY ENDS, Eric Tsang Chi Wai as an elder consoled him and advised him not to mind what others said. He cited Alan Tam Wing Lung was criticized for winning too many awards and decided to retire from award shows as an example and said that it was very regrettable for the music scene to lose a superstar. he asked him to be himself. Lam Fung then stressed that he did not want to retire from accepting awards.

Joey won 4.5 awards to become the big winner. The 8 time "Most Popular Female Singer" said that every time she won the award her heart would still beat like crazy, she needed fans to keep cheering for her. Winning the Asia Pacific Most Popular Female Singer award again after 5 years, Twins' Ah Sa emotionally embraced Ah Gil and cried. She said that since winning this award in 2007 a lot have happened. This road was not easy but they would keep on walking it. Ah Gil calmly thanked the record company and fans. Taiwan group Lollipop F won its first Asia Pacific Most Popular Male Singer award. Lam Fung appeared to be more excited than the winners as he immediately rose and shook their hands to congratulate them. Perhaps he felt like he was "off the hook" and would not be made fun of as the "Argyle Street and Prince Edward Road intersection singer" anymore?

Wong Yuen Chi's TVB series INBOUND TROUBLES (LO BIU, NEI HO YEH!) will air soon. Her record company fought for her to win "Gold Song Gold Prize", but when the result was announced she mouthed "Really?" and said that she was surprised. On television Joey Yung's mouth was left gaping, perhaps she too felt it was a surprise?

Lam Yun Tung lost her voice last year, then she was rumored to suffer from depression and anorexia. After over half a year in recovery, Lam Yun Tung last night performed for the first time. Her voice was as beautiful as it was before as she returned to form and put those who worried about her at ease. She was still a little thin. Lam Yun Tung with TREE VINE won a Gold Song award and her duet with Joey Yung, THE KITE CHASING KIT, also won the "Most Popular Duet" silver prize.

G.E.M. (Tang Chi Kei) last night won the first Gold Song award. Recently she was upset at the Commercial Radio award show and had elder Jenny Tseng (Yun Nei) call her impolite. During her speech she continued to take jabs at Commercial Radio and elder singers. "Many unfair things have happened in this society, like older people bullying younger ones and suppression. I feel I shouldn't submit to any power." Later she was asked what advice she had for new artists. G.E.M. joked, "You have to greet people! You have to be polite to people!"

Terence Siufay with ONE SONG won a Gold Song award. He was emotional as he accepted the award, especially when he mentioned giving this award to his father who just passed away. Siufay thanked Paco Wong and singers who started at the same time as he did, which also made Paco Wong teary eyed.

Jade Kwan Sum Yin a year ago accidentally "robbed Susanna Kwan Kuk Ying of her award". Last time with HEART BREAK PHILOSOPHY she won a Gold Song award. Tsang Chi Wai announced the winning singer as if he was announcing a phone call. "As soon as Sister Kuk's name is named, this person would come out." Kwan Sum Yin hesitated. She joked, "Today my friends told me Sister Kuk won't be coming. Thank you everyone for presenting the award to me in such a special way."

Reportedly numerous singers declined the Asia Pacific Male Singer award and TVB could only present it to Taiwan group Lollipop F. Tsang Chi Wai joked, "If they don't want it either, I will take this award! I am 'Law Lai (Lolli) Shui' (cause his own trouble)! Maybe I am 'Law Lai (Lolli) Siu' (to be laughed at)!"

When Lam Fung won his first Asia Pacific Male Singer he was made fun of as "Argyle Street and Prince Edward Road Most Popular Male Singer". Chi Wai joked, "Is Sai Yeung Choi Street included? This street is amazing, even the Lunar New Year film is shot here. It represents most Hong Kongers!"