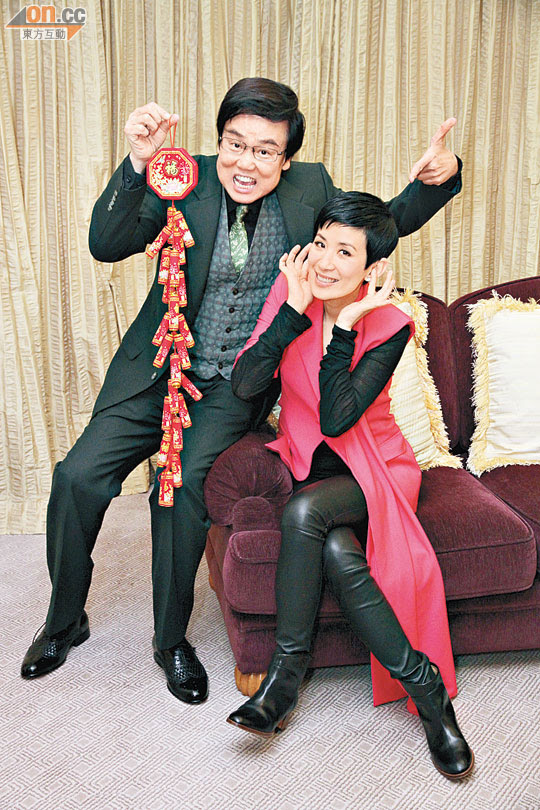 Sandra Ng Kwan Yu and Raymond Wong Pak Ming have worked together on many Lunar New Year films. This year they again teamed up on the Lunar New Year film HOTEL DELUXE (BAK SING JAU DIM) with Chapman To Man Jat, Ronald Cheng Chung Kei, Eric Kot Man Fai, Fiona Sit Hoi Kei and others. Kwan Yu in the 1992 ALL'S WELL ENDS WELL (GA YAU HEI SI) played Wong Pak Ming's wife memorably, but in the Lunar New Year films afterward he "changed". "(Mini) Yang Mi caught his eye, in ALL'S WELL ENDS WELL 2012 (BAK SING PO HEI) he wanted to play a couple with Yang Mi. They weren't able to become a couple, so he went for playing father and daughter. Now he finally learns how good I am, this year no matter what he wants me back, haha!"

This time Kwan Yu played a hotel maid and was not a pair with Wong Pak Ming. She said, "Actually Boss Wong gave me character choices, but I liked characters that others bullied. The audience wouldn't laugh until we are being tortured." After years of working together, Kwan Yu pointed out that the salary was reasonable. "I grew up working with him, we have a relationship so I wouldn't ask for too much. I didn't expect for him to shake my hand at my opening price, I really regret that I didn't open with a higher price!"

This year Stephen Chow Sing Chi joined the Lunar New Year fray, which was good for viewers. Kwan Yu said, "They have pretty girl Shu Qi, we have (Karena) Ng Chin Yu, Sit Hoi Kei and me, pretty girl of every age group are in it. We even have all the top Hong Kong comedy actors so we are very confident." Wong Pak Ming said that thriving Chinese films was good for everyone. "Chow Sing Chi is only working behind the camera, I am not worried about splitting the box office. Every year we have an audience and box office base."
Posted by hktopten at 5:15 PM