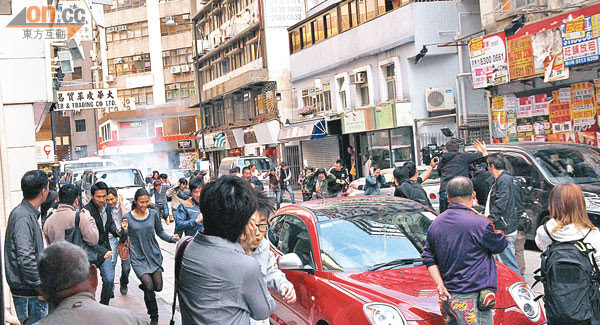 Nick Cheung Ka Fai and Daniel Wu (Ng Yin Cho) after the New Spring holiday resumed work on the Emperor new film MOR GAING (DEMON COP). Yesterday the team worked on a gun fight scene in Tsim Sha Tsui. Director Dante Lam Chiu Yin arranged for uniformed cop Ka Fai to shoot into the crowd. Some extras dodged left and right. Daniel was trapped inside a vehicle and could not move. He could only shoot from afar to stop Ka Fai.

As the actors were about to take their places, suddenly several thugs appeared to hinder the production. Some were yelling loud and silenced the location. The crew was helpless. After several interventions finally the matter was settled. At the time Ka Fai and Daniel witnessed everywhere from their resting spot. Daniel said, "I am not scared, with so many people here nothing would happen. The producer can handle it."

As for the production hindrance, Ka Fai half jokingly said, "I don't know why, this movie always has similar situations."

In comparison to the thugs, Ka Fai was more nervous about how he held his gun. He often practiced and even jokingly asked reporters, "Do I look cool?" Actually having worked on the police force before show business, Ka Fai was rather familiar with how to hold a gun.

Turning bad in the film Ka Fai was already in character as soon as he took his mark. As soon as Director Lam yelled action, he immediately ignored Daniel who was trapped in the vehicle and fired into the crowd. After several reaction shots smoke arose. Several residents above looked around but they were not scared. Instead they wanted to see stars and took photos with their phones.
Posted by hktopten at 3:30 PM