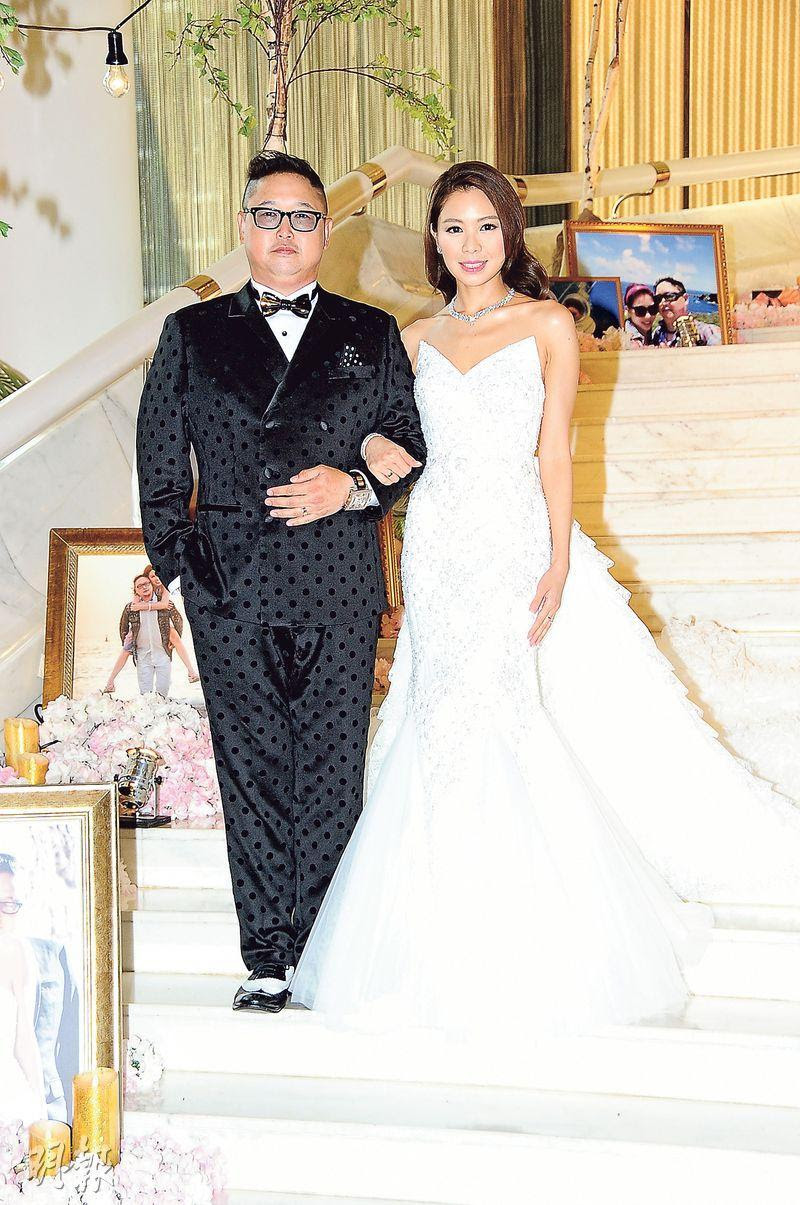 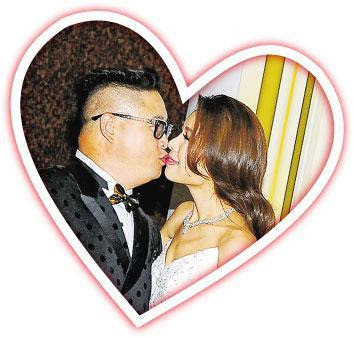 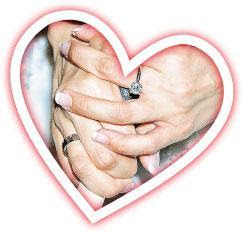 Director Wilson Chin Kwok Wai yesterday married his artist girlfriend of many years Calinda Chan Wai Yuen. They held a 51 table banquet at the Intercontinental Hotel in Tsim Sha Tsui for family and friends. Wilson not only had the Dior Cheng Yi Kin led "star class" groom and bride parties but also a star studded banquet that rivaled the TVB anniversary.

The wedding color was gold, the heart shaped symbol with their English name initials "C" and "W" was the them. Wilson conceived the invitations and the logo. The venue was filled with warmly colored lit fruit trees. Next to the stairway were their wedding and life photos, including their hilarious role switching wedding photo, to share their joy.

Calinda wore the white tube dress with a long train that she helped design and a golden crystal evening gown. With the jewelry from her parents and Wilson, the three karat engagement ring and wedding ring she shone all over the venue. Before the banquet, the new couple first met the media and "kissed" graciously. Calinda said that she felt like she was dreaming, but she stated, "I want to control my husband's deeds and accounts, I vow to be the finance minister!" Because both had to work their honeymoon would have to wait. Wilson said, "Because Ku Kui Kei and Young and Dangerous will have upcoming shows, Two Goo at the same time! (Will you make it up?) We are always on vacation."

As for a family, Wilson admitted that he has not planned for it yet. Calinda said, "For a year I have been waiting for this day, tomorrow's matter will have to wait until tomorrow." Was they worried that they would be made drunk at their wedding banquet? Wilson said that he was the most afraid of Tsang Chi Wai. "I am afraid that I would fall asleep with him. My brothers are worrying about that too, especially (Alex) Fong Lik Sun." The bride said that she has already booked a "car for the immobile". Wilson even set up best man Siu Fong and his girlfriend Tang Lai Yun. "I will help Siu Fong take care of it." When the bride tossed the bouquet Cheng Yun Yi caught it.

Then the new couple cut a nine layer cake together, as the screen showed video of their lives, Wilson's proposal and last night's registration. Wilson gave special thanks to his other Papa Tsang Chi Wai during his wedding vows, the bride got choked up while reading hers. Chi Wai praised how lucky Wilson has been with people. "He took care of even the three great families of Big Four, Young and Dangerous and the Super Trio." He also praised the birde, "She sacrificed herself to save all women. If I have to describe Chin Kwok Wai, it is it's not too late to turn around. After all that I just want to say that Chin Kwok Wai is a good husband, I said that because I didn't bring a gift." The entire crowd cracked up.

In a golden brown suit, Wilson around 9AM led best man Fong Lik Sun the the star class "silver brothers" Dior Cheng Yi Kin, Michael Tse Tin Wa, Jerry Lamb Hiu Fung, Timmy Hung Tin Ming, Lai Lok Yi and others in a classic car and three Ferraris to pick up the bride. The brothers all walked in a row, made poses and shot videos from on drone. Chin Kar Lok was late.

Because the groom was anxious, when he picked up the bride he went to the wrong room. Kar Lok joked that he normally had his eyes on everything and was very alert, today he was rubbing his fingers and his eyes had no focus. "We went to the wrong room because it was a trap, but seeing someone facing a life event is very nerve wrecking." Soon the bride pick up process was online. The brothers gave their all to help Wilson. With sisters Jacquelin Chong Si Man, Elena Kong Mei Yi, JJ Jia, Janet Chow Ka Wai and Calinda's sister Mandy, Tin Ming put nude bras on his face like a facial for likes online. He also had to try bitter melon, wasabi and sugar mixed drink to "share the sweet and the bitter". Lok Yi and Tin Wa had to reenact their new couple's wedding photo pose and made a heart with their bodies. Finally Wilson after his declaration of love successfully picked up the bride. Then they sweetly kissed and presented tea to the parents.

Speaking of the door opening lai see, Kong Mei Yi joked with her they successfully turned one into two. Chong Si Man said that they sent JJ to flip her hair to distract the brothers. They also praised how cooperative Yuen Siu Cheung was. "He was physically with the brothers but his heart was with the sisters."

Many couples were arranged to sit at the same table like Yeung Yi and Law Chung Him, Fong Lik Sun and Tang Lai Yun, Chen Mei Si and Suen Yiu Wai, but some couples were forced to "break up" like Alex Lam Tak Shun and Linah Matsuoka, Chin Kar Lok and Tong Ying Ying had to sit at separate tables.

Also present were former couples like Amigo Choi Kin Bong and Natalie Tong Sze Wing, Sammy Sum Chun Hin and JJ Jia. In a rare appearance as a couple, Yeung Yi and Him Him said that when people grew up they had to wed, before getting married they had to work hard and make money.

Yesterday before the wedding, the groom Chin Kwok Wai and the brothers drove many luxury cars to pick up the bride at the Intercontinental Hotel.

The lead car was a priceless deep blue Rolls Royce classic car, in addition three colorful Ferrari's in red, white and yellow were in the fleet as well.

Wilson deliberately prepared a thoughtful gift for their guests, hair gel for "going out". He personally designed the package, the Hong Kong trendy culture symbol "Po".

The silver hair gel and trendy elements that created an active hairstyle and instant hair color effect, making it convenient for guests to change their look on the fly for the after party.
Posted by hktopten at 6:20 PM