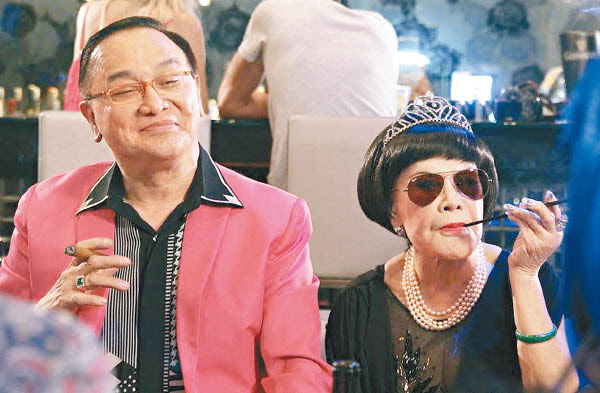 The stars in 2009 made the comedy NGOR YIU JO LANG MO (I WANT TO BE PSEDUO MODEL), but the film was never released. Playing a manager Shek Chi displayed her career line in one scene. Her on screen boyfriend Pakho even dressed as a woman. Reportedly Pakho as a new comer at the time only was paid around HK$ 100,000. He made many small budget films and even once talked about the pain and the joy of a female disguise. Six years later Pakho is no longer what he was.

Pakho responded through his manager and said that no one informed them of the film arrangement, but helplessly said that they did not want to say more to prevent promoting for others. "As an actor he has done his best in his performance. What happens afterward is beyond his control. We can't find the person in charge back then, so we are not considering taking any action!"

Shek Chi said that she made a comedy back then, but now it added a lot of sex elements. "All I can do is laugh, at most I would watch my part. I never guess that real life is funnier than the story. Even the poster got my name wrong! Back then my management company took the film for me, now I can't really take any action. However I am optimistic, I am very happy to have worked with a group of elders." Lulu admitted, "It's regrettable that the previous film was not released, but now with some strange scene it is beyond brutal. (Will you take action?) Unfortunately I didn't keep the contract."