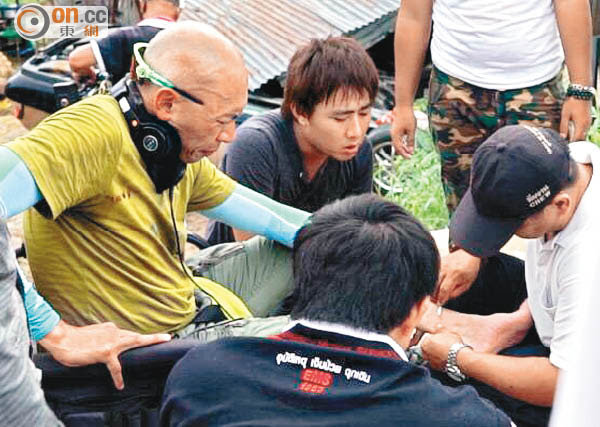 Director Dante Lam yesterday brought his film TO THE FORE (POR FUNG) to the Tokyo Film Festival for two screenings and a director forum. Viewer responses and praises warmed his heart and greatly strengthened his confidence in the film's Oscar Best Foreign Film nomination chances. Because he had to fly to Malaysia for his new film OPERATION MEKONG, Director Lam even had to take time to write the script and was unable to visit Tokyo!

Director Lam earlier while shooting the film in Malaysia received a bite from a six inch long centipede. Despite his high tolerance for pain he screamed and the team had to carry him off the hill and to the ambulance. Director Lam said, "At the time the centipede bite felt like fire, I was immediately numb and dizzy. At the hospital I got two shots and I immediately rushed back to continue the shoot. I still haven't completely recovered yet. This time luckily the bite was on my leg and not my arm, which would be closer to the heart and could be fatal!"

He immediately ordered rain boots for the team and prepared for serum and doctor supervision on the set just in case. TO THE FORE tonight will be screened outdoors at the Queen Victoria Park to raise fund for charity. The event originally only invited 500 viewers but due to the overwhelming response over 600 tickets were sold. The noise issues that Director Lam was concerned about earlier has also been resolved.
Posted by hktopten at 2:32 PM