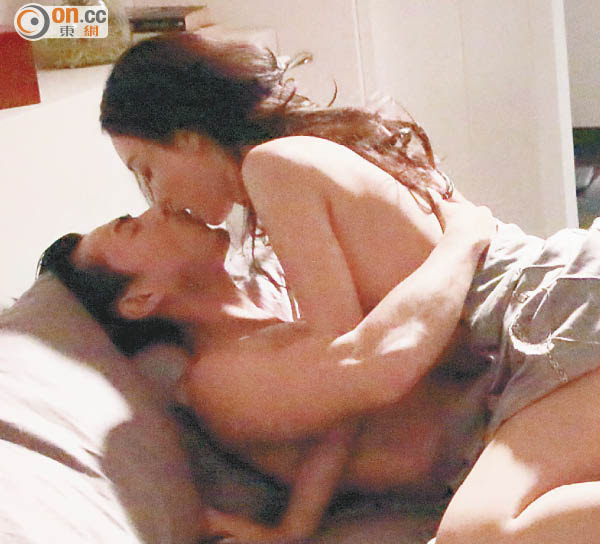 On only her second day of work, Leslie was rather anxious before the shoot. She often recited her lines to herself. Yet as soon as the cameras started roll she became "possessed". According to the story she took the initiative with Dominic, threw herself at him and kiss him. She delivered her line smoothly and did not perform like a new comer. Later they went to the room for a bed scene. In a bath robe she followed director Keung Kwok Man's direction. After drinking for courage she disrobed. Leslie only put tapes over her vital areas and Dominic did the same. Although many were on the set, Leslie had no stage fright at all. She rolled around on the bed and even bared her back side. Leslie finished the scene in one take. Dominic professionally covered up for her with his arms.

Leslie said that she was inevitably nervous after giving up her first time again and again. Luckily she had Dominic's advice. "He reminded me to capture the timing. With him I would be more relaxed. Earlier I practiced in front of the mirror. I hoped that I would do my best with the expressions and the looks. (Was being nude awkward?) Everyone has been very friendly and focused on work. It wasn't as awkward as imagined."

Dominic had nothing but praise for Leslie. "As soon as the cameras rolled she was no longer nervous, proving that her body was used to performing. She had intentions to improve, which was necessary for a good actor. (Did you fall for her big eyes?) Yes, in the story we want to love but we can't." He even praised Leslie to be a better kisser than his other co-star Connie. "They have their own advantages, but if I have to choose I would choose Leslie because her height is more appropriate."

As for the nude scene, they both said that they worked hard on getting in shape before the shoot in hopes of appearing at their best. Dominic even said that he kept slamming egg white. "Lately I kept eating bananas, eggs, vegetables, I am confident that I am in better shape than the last film." During the interview Leslie remained mild mannered, but she could only help but revealed that Dominic loved to play "gags". Dominic said, "Work is so heavy, I want everyone to relax a little!"
Posted by hktopten at 8:59 PM