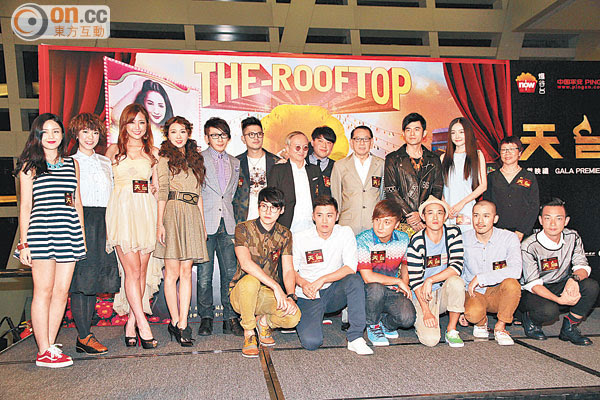 The Jay Chou (Chow Kit Lun) directed and starred film THE ROOFTOP two nights ago held its premiere in Kowloon Tong. Fiona Sit Hoi Kei, Alex Fong Lik Sun, Derek Tsang Kwok Cheung, Paco Wong, Emperor boss Albert Yeung Sau Sing, Sammy Sum Chun Hin, Oscar Leung Lit Wai, Lu Chen as well as almost 200 fans showed their support. Chow Kit Lun said that he has not held an autograph session in Hong Kong for years, this night felt like one to him. He thanked everyone for not forgetting him and hoped that fans would support the film. He looked forward to the film's Hong Kong box office to be able to pass his previous direction SECRET (BUT NUNG SHUET DIK BEI MUK). Speaking of the film's Taiwan release with less than ideal box office, Chow Kit Lun said, "I too thought it was curious. I was confident but had no certainty. Taiwan box office needs luck. Taiwan has less theaters and most show Hollywood films, but as long as I can live with myself it's OK. The word of mouth is more important than the box office. I will think about awards later." Chow Kit Lun said that he will continue to work hard on the director road, as he still had many subjects that he wanted to make like aliens and UFOs. He said, "I wanted to make SECRET Hollywood version, would I ask Leonardo (DiCaprio) to play it? Let me think about it!" He joked that since he has not found an investor it would depend on this films' box office. If the box office would be decent, he would have more money for next time.
Posted by hktopten at 4:47 PM