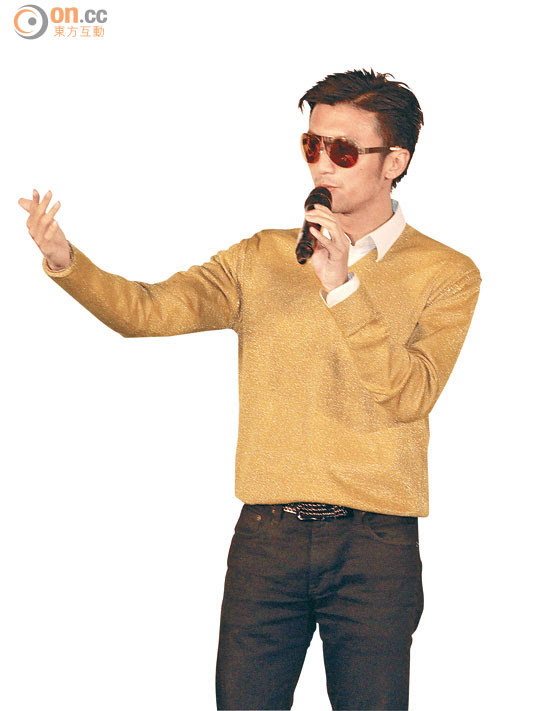 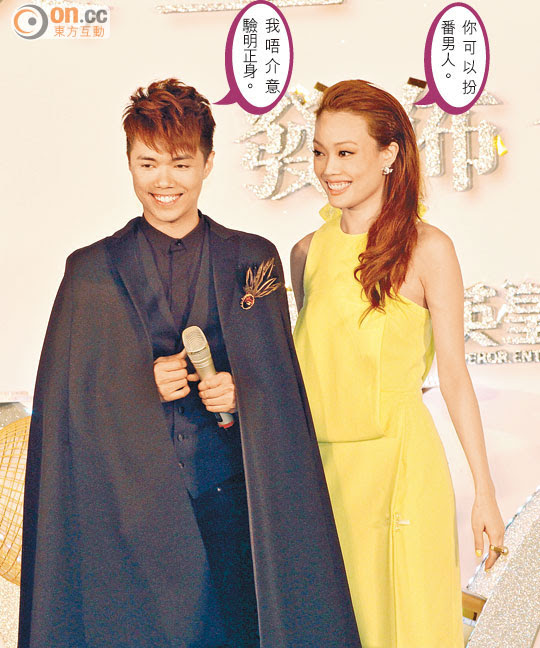 The 33 year old Nicholas Tse Ting Fung was rumored to be in love with the 38 year old Best Actress Zhou Xun. Zhou Xun who became a Hong Konger through the Quality Migrant Admission Scheme supposedly moved to Hong Kong and into the same building as Ting Fung. The report even claimed that his former wife Cecilia Cheung Pak Chi was jealous after learning that they were in love and took their sons to live in Canada. Ting Fung who has never hidden his relationships rapidly claimed that "they knew each other but are not in love" along with Zhou Xun. The neighbors have not moved in together either.

Tse Ting Fung yesterday appeared at Cheung King Hin's Emperor Entertainment press conference. When the host made fun of him for a lot of recent news, he said, "Don't believe what was written in the report!" Ting Fung did not want to steal his junior colleague's thunder and had to rush to Cyberport for work, thus he turned down interviews. However he still through his manager Mani Fok Man Hei denied any new romance. Fok Man Hei said, "Ting Fung was clueless when he saw the report. He absolutely isn't in love with Zhou Xun. Since his divorce to now he has been single." Did they know each other? Fok Man Hei said, "They know each other, but they are just neighbors who live in the same building. Even Ting Fung is clueless. They are 100% not dating. Hopefully the media won't speculate. Ting Fung is single now!"

As for whether Pak Chi took their sons and immigrated to Canada, Fok Man Hei said, "Pak Chi has already communicated with Ting Fung before hand. Ting Fung knew that his former wife and their sons went to Canada. Their sons will return to Hong Kong." She said that Ting Fung wanted for his sons to grow up healthily the most and not be the target of the media.

Ms. Yang from Zhou Xun Workshop's promotional department said, Zhou Xun and Ting Fung absolutely are not in love. She said, "Zhou Xun read the report and was very surprised and clueless. In 2000 she worked on Ting Fung's music video. They knew each other a long time ago but are just ordinary friends. They don't have any personal relationship, just exchange greeting at public events." Ms. Yang said that Zhou Xun is working in Hong Kong. She moved into Ting Fung's building because the production rented a place there. She did not buy any property in Hong Kong.

Patrick Tse Yin said that he has not heard about Ting Fung's new romance and was certain that Pak Chi did not leave for Canada out of jealousy. He angrily said, "It definitely isn't like this, don't make up news. It would affect the children!"
Posted by hktopten at 2:04 PM