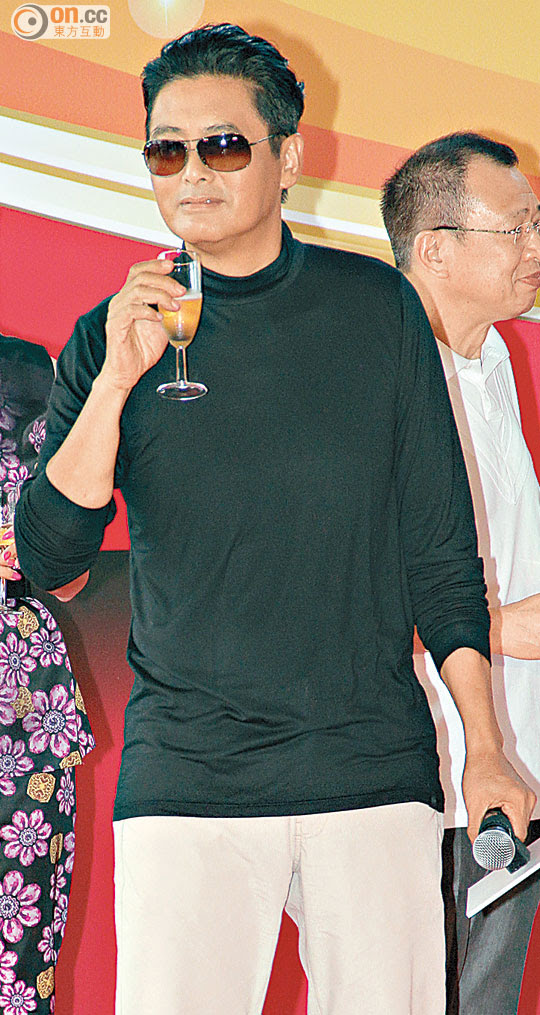 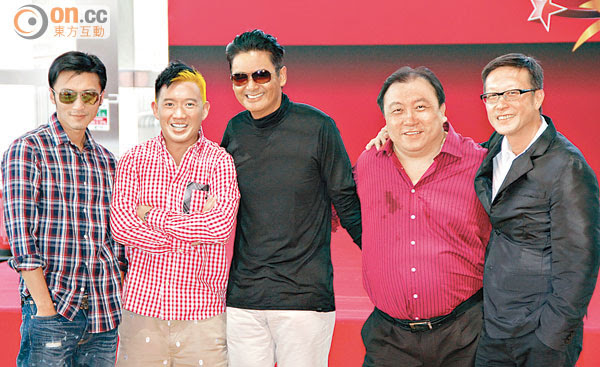 Chow Yun Fat and Nicholas Tse Ting Fung yesterday announced their participation in the TVB Lunar New Year film. The Hollywood superstar Fat Gor returned home to go to war for TVB and received the star treatment. Director Wong Jing even revealed that he charged his Hollywood film rate for a Hong Kong film. Reportedly, Fat Gor's Hollywood rate was US$8 million. During the event, Fat Gor and his first time co-star Ting Fung joked around. He said that he received care from Patrick Tse Yin and Deborah Li, so he had to return the favorite and "pick on" Ting Fung.

Chow Yun Fat, Tse Ting Fung, Chapman To Man Jat will star in the TVB invested 2014 Lunar New Year film FROM VEGAS TO MACAU (DOH SING FUNG WON, tentative title). Yesterday the film held a press conference in Television City. Director Wong Jing, producer Andrew Lau Wai Keung, actors Hui Siu Hung, Max Zhang Jun, Philip Ng Won Lung, Sammy Sum Chun Hin, Jing Tian, Natalie Meng Yao, Tong Fei, Yuki Cheng Ni attended. Fat Gor appeared with Fat Soh and received a star treatment, with security making way for him and protecting him. However he remained friendly as usual, shaking hands and greeting with former TVB colleagues as he passed by. Fat Gor said that he and Ting Fung both have not eaten for months to slim down. Although the film had the words DOH SING (gambling city) it actually will be a police film. To Man Jat will provide the comedy, Ting Fung the action, he will just perform. It will not have andy shade of his old film GOD OF GAMBLERS (DOH SUN).

Fat Gor has not worked on a Lunar New Year film and a Hong Kong film for a long time. He lamented, "Ting Fung is so big already, married with children." Ting Fung said, "I am divorced!" Fat Gor joked, "I didn't know, sorry. You divorce sooner than me!" Ting Fung joked that he felt like he was stabbed.

Ting Fung was very honored to work with Fat Gor, which was his dream. Fat Gor joked, "Your Old Man and Old Ma used to take care of me alot, this time I am returning the favor. Let's how I will 'pick on' him." Did he take the role for an astronomical sum? Fat Gor said, "Don't ask me, ask Mrs. Chow!" Director Wong Jing revealed that when working with Fat Gor, salary and conditions all matched his Hollywood contracts. Fat Gor's Hollywood film salary has been rumored to be US$8 million.

Fat Gor described his first time in Television City as returning to his home field. Recently he has been watching TRIUMPH IN THE SKIES 2 (CHUNG SEUNG WON SIU 2): "(Francis) Ng Chun Yu, Cheung Chi Lam both have a lot of flavors, they are my idols; (Kenneth) Ma Kwok Ming is a bad boy, with so many girlfriends; (Myolie Wu) Hung Yi is very tough with her brother, like she is trying to kill him!" Would he be interested in TRIUMPH IN THE SKIES 3? Fat Gor joked, "Yes, I definitely have to play a captain, the manager inside the cabin, the type that arranges for table for two. However I am afraid that I wouldn't be tough enough to make a series." He also praised KARMA RIDER (SI FU MING BAK LIU)'s Priscilla Wong Chui Yu for her good performance. As for Ricky Wong Wai Kay's application for a free television broadcast license, Fat Gor said, "Seemingly the government already promised it in the last term, this term the government hasn't issued a license to him? Later he definitely will receive on. More television stations are good for more programs."

To Man Jat's salary will be double of when he made Raymond Wong Pak Ming's Lunar New Year film. He joked that aside from "pumping water", he will also study photography with Fat Gor and Wing Chun with Ting Fung. He said, "I hope the film will be finished by October, then I will work on NAKED AMBITION 2 (HO CHING 2). In that film I will work with over 100 adult video actresses. They are used to making category IV films and don't understand why Hong Kong makes a category III one. They even want to invite me to rehearse in Japan and teach positioning. If in the end I really have to do it for real, I wouldn't mind. However I would have to ask the Old Lady first."
Posted by hktopten at 2:06 PM