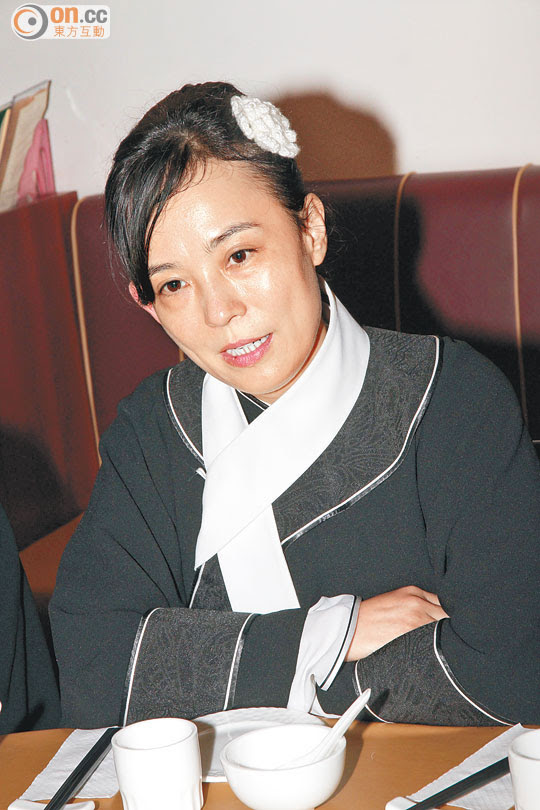 Famous film director Lau Kar Leung has worked with Shaw for years, with many films that were big hits. Actually over the years he has never received any royalty that he deserved. His widow Mary Jean Reimer (Yung Jing Jing) yesterday announced the establishment of the "Director Lau Kar Leung charity foundation" at Master Lau's funeral and publicly urged Sir Run Run Shaw (Siu Yat Fu) to be the first donor, to donate all the royalty that Master Lau should have had and lead everyone to support the charity foundation.

Yung Jing Jing during her eulogy announced the establishment of Director Lau Kar Lung charity foundation. She personally donated HK$1 million to the charity to help stunt people and those in need in the film industry. She even made a surprising revelation that Despite years of working with Shaw, Master Lau never received any royalty. Thus she hoped through the charity establishment to urge Siu Yat Fu to donate the royalty that Master Lau deserved over the years and contribute to the industry together. She said, "Master was not someone who liked to keep count. I have known him for 30 years, he has made many films for Shaw, every film had a contract that stipulated international and Hong Kong royalty. Yet over 30 years, Master has never received any. We believe that Mr. Siu Yat Fu is very kind, saving it for us and then investing it. I think this sum now should reach at least 5 million if not 50 million. Thus we hope Mr. Siu Yat Fu would donate this sum to the charity. What does everyone think?" Applause rose from the audience. Yung Jing Jing also mentioned that she needed to muster up a lot of courage to say what she said. She thanked her children for their support, feeling that if she did not say it yesterday she would not have a chance to say it again. She said emotionally, "I hope Mr. Siu Yat Fu can hear those words. You won't lose money. You can repackage Master's movies then sell them again. Thank you everyone!" Guests then applauded and cheered.

Yung Jing Jing later at the post funeral banquet expressed that the charity establishment fulfilled Master's wish and took the chance to remove the thorn in the palm of his hand. She pointed out that back then when Master made movies for Shaw, he signed many contracts without dates. He didn't have a lot of legal knowledge and thought that they were all permanent, which made him worry when he was working. However Shaw has never given Master any royalty, only a beautiful future. She said, "This future is wished for but never attained. Master for years has never gone after it, neither was he contacted. Master was more generous, different from me. He left alot inside and wouldn't speak up. If not for the charity this time I wouldn't care." She stressed that she did not blame anyone and believed that as a very large scale company, Shaw overlooking one or two accounts would not be a surprise. Would she take legal action if she would not receive any response? Yung Jing Jing said, "I am not talking about that, in addition how could there be no response. You are so attentive, maybe there will be more responses. I believe they definitely just overlooked and missed it." The film industry was more practical, not everyone was as willing to help friends and disciples as Master was. A timely shower was very important, thus it needed the foundation's help very much. She again stressed that Master was someone who was willing to take a loss and would not hold anyone accountable. He was a great man unlike a little woman like her. She said that this move was very rude. She said, "I won't find a mediator, just treat me like a kid who lacks any understanding of the world. I needed courage to say what I said. In Master's memory he remembered there was a sum that hasn't been calculated, just treat it like helping him pulling out a little hang nail. The foundation now is like a baby. When a person is poor he remembers old debts. We won't talk about the law. Since we were employer and employee, we hope to complete this together."

Sin Kwok Lam said that the Master's wife was not collecting a debt. She only helped to help spread Master's love to the world and believed that Mr. and Mrs. Siu Yat Fu would support it. Yung Jing Jing finally said again that she hoped that Siu Yat Fu would take the lead and be the first donor. She stressed that everything that she said and did was to ask for donations for the foundation. Shaw executive Wong Ka Hei only replied, "It's the same old song, no comment! Let she say whatever she wants to say."

Nat Chan Pak Cheung was not certain about Master Lau's Shaw royalty issue. It was the first time that he heard about it as well. He said, "This is their private conversation, I can't speak for her. No comment. The most important is for the Master's funeral to be done safely and fully." Perhaps due to this reason, Master Lau's funeral program never mentioned Siu Yat Fu's name.
Posted by hktopten at 5:04 PM