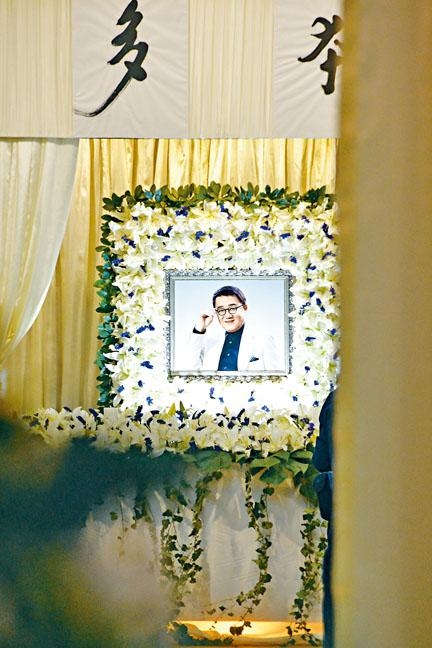 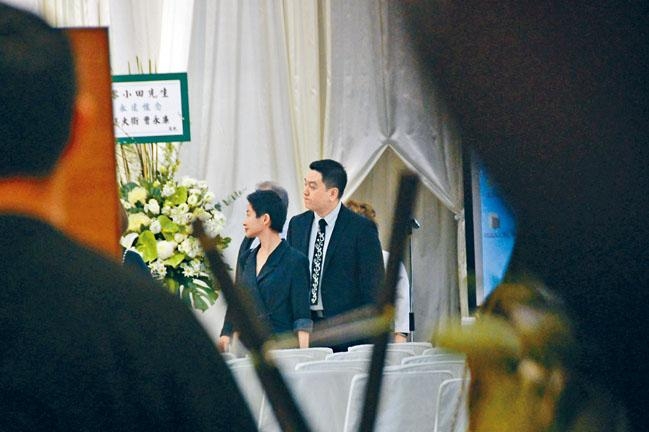 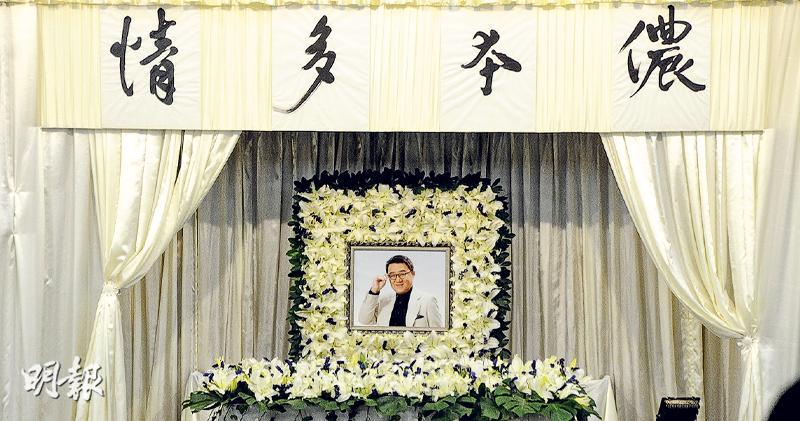 The musical giant of a generation Michael Lai Siu Tin passed away on the 1st at age 73. Yesterday services began at the Universal Funeral Parlor. The farewell ceremony took place at 10AM and the remains would be transported to Cape Collinson crematorium for cremation.

Mani and boss Dr. Albert Yeung Sau Sing left after half a hour. Mani said, "Lai Siu Tin was my mentor. He brought me into the business. He helped many younger singers. He met many of the company's new comers first and he gave a lot of suggestions. The final time I saw him was at the hospital, a week before he passed. He was very peaceful. His passing was very regrettable because he was a very talented musical genius. The atmosphere at the altar was very peaceful, but a black butterfly with white spot appeared. From 5PM until now it was still on a chair. A group of friends surrounded the butterfly to say goodbye."

Ah Jeh left after half a hour and stopped to speak to the media. She said that she saw many decade long friends from both on and off screen. Siu Tin's friend circle was very wide, with people in music and film. She, Philip Chan Yan Kin and others sat together and talked about their experience with Siu Tin, but she did not attend the viewing. Speaking of Mani mentioning that a butterfly was inside, Ah Jeh said that she did not see it.

Chan Siu Ha's husband Lee Man Fai said that he has known Siu Tin for several decades, they used to constantly meet to chat. Siu Tin would sing and play the piano, but earlier he did not know about Siu Tin's illness. He only found out from the newspapers, so he truly felt sorry. Although they have not seen each other for over a year, they still talked on the phone. He remembered when he got married Siu Tin attended and even complained that that he did not have a piano to play. Chan Siu Ha broke down and said, "Siu Tin was a great person. Earlier originally we had some charity work and music that we wanted to work with Siu Tin on. When I went to the hospital I saw many reporters, but I didn't know they were there for him. (Did you regret that you didn't contact Siu Tin?) No, I would pray for him and am very grateful that he held a wake. Those of us in Hong Kong could come and send him on his final journey."
Posted by hktopten at 3:10 PM