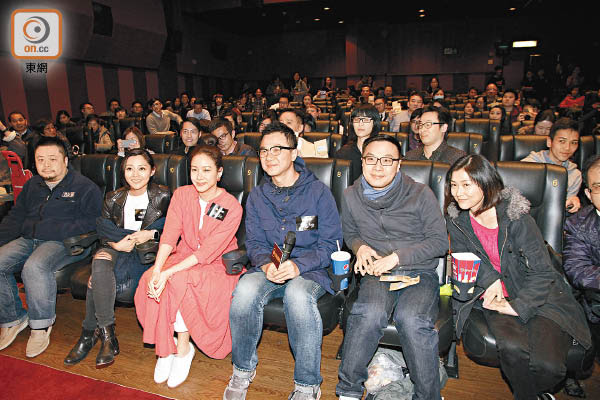 Best Actress Karena Lam Ka Yun and her director husband Steve Yuen Kim Wai, Michelle Wai Si Nga yesterday attended their film HEAVEN IN THE DARK (UM SIK TIN TONG)'s audience appreciation event. Speaking of the box office, Ka Yun said, "I don't look at the box office. The most important was that the film had good word of mouth. I already have answered for myself when I have played the character well." Wai Si Nga said that the audience asked why lead actor Jacky Cheung Hok Yau was absent. Ka Yun revealed that Hok Yau due to his daughter's Easter holiday from school was busy with his family. Ka Yun also revealed that she will take time off to celebrate Easter with her daughter.

Nominated for Best Actress with the film, would Ka Yun dress up for the Hong Kong Film Awards? She joked that her director husband Yuen Kim Fai will be next to her so she would only dress conservatively. "I won't be sexy because the director will be next to me. I will cover up very tightly. (Will you walk the red carpet with Hok Yau instead?) Of course I will be with the director! I will almost wear a turtleneck!"

The Hong Kong Film Awards results were rumored to be leaked online earlier. Ka Yun was said to lose the Best Actress to Miriam Yeung Chin Wa while Hok Yau was said to lose Best Actor to Aaron Kwok Fu Sing. Ka Yun did not mind. "That's not important, the most important is I get to be in a movie. The award shows and the promotions to me are parts of work but not all of it. Enjoying the moment is the most key in acting! (Do you believe these results?) I wouldn't pay too much attention to them, I used to be very afraid of the results. Now I feel I shouldn't deny my own abilities because of the lack of an award."

Ka Yun also said that Hok Yau already won Best Actor in her heart. "He did well, very natural. (Would you make an award for him?) He knows!"
Posted by hktopten at 3:19 PM