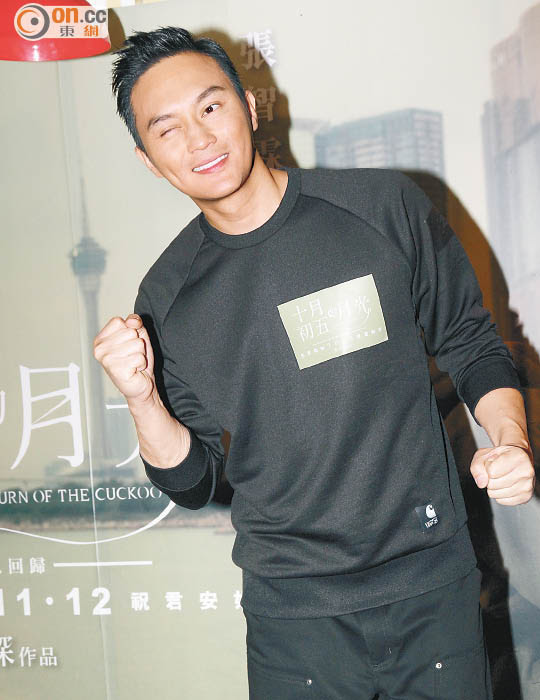 Julian Cheung Chi Lam, Jacquelin Chong Si Man and Leung Kin Ping yesterday promoted the film RETURN OF THE CUCKOO (SUP YUET CHOR NG DIK YUET GUONG) in Mongkok. Chilam's appearance caused a stir as many looked on and took photos. Then the trio gave away almond biscuits, the crowd fought over them and almost knocked down the speakers.

Later Chilam admitted that crowded place would be more dangerous. Luckily reporters on hand held up the speakers to keep them from being knocked down. He said, "I suggested for the event to take place at the shopping center, but I didn't want to be distant (from the crowd). Thus after the event I immediately left, I didn't want to cause a ruckus." Having been away from Mongkok for awhile he felt that the people were still enthusiastic. Instead on the MTR no one would pay any attention to him because they only had their eyes on their phones. Two nights ago Chilam with the film TRIUMPH IN THE SKIES (CHUNG SEUNG WON SIU) won the "15th Chinese Film Media Award" for Most Popular Actor of the Year award. He said that he won another award for the fans. Last night he would celebrate with a family dinner.

Speaking of parenthood, Chilam said that he and his son Morton were like friends. However once he gave his son quite a beating. When Morton was 5 or 6, after his grandmother stopped him from doing something he hit his grandmother. Chilam was fuming and punished his son. Later Morton and his grandmother's relationship became very solid, as his son learned to respect his grandmother.

Jacquelin admitted that her father was ailing. Earlier he only came to Hong Kong for a follow up visit but he was fine. Now her father is resting in Malaysia.

Vicki Zhao Wei two nights ago with the film DEAREST won the Chinese Film Media Award Best Actress of the Year. Qin Hao with BLIND MASSAGE won the Best Actor of the Year.

Zhao Wei said that at her age it was rather hard to find a challenging character, thus she had to thank the screenwriters and director for their contribution; she also felt that without the team's effort she would not possibly stand on the award stage.

Charlene Choi Cheuk Yin also with the film SARA (CHOR GEI) won Most Popular Actress, another award from her earlier Macau International Film Festival Best Actress and Osaka Asian Film Festival 2015 Special Mention prize. Ah Sa after accepting the award from director Lu Yang sentimentally said, "Like the Chinese Film Media Award I have been in the business for the 15 years. To be able to make SARA, I am very lucky. As an actor, the most basic is to accept different challenges. I will continue to work hard."

Ivana Wong Yuen Chi with GOLDEN CHICKEN SSS (GUM GAI SSS) won the Most Eye Catching Performance Award. The Mainland audience started to accept her performance, which was the ideal performance that she never dreamed of.
Posted by hktopten at 5:47 AM