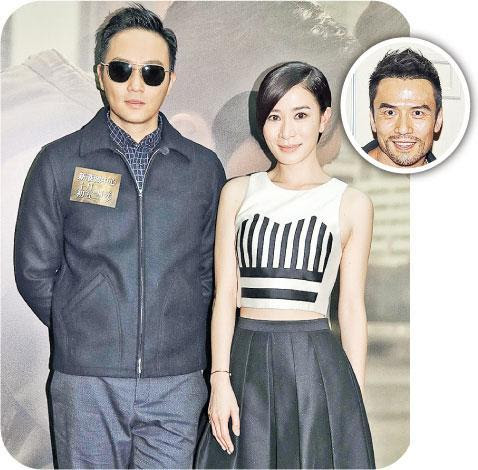 Julian Cheung Chi Lam, Charmaine Sheh Si Man, Nancy Sit Ka Yin and others yesterday promoted their film RETURN OF THE CUCKOO (SUP YUET CHOR NG DIK YUET GUONG) in Ma On Shan. Chilam and Ah Sheh demonstrated their intimate poses from the poster and played games as they attempted to go through the fan made paper rings. However Chilam and Sister Ka Yin could not go through. Chilam joked that Sister Ka Yin's great chest dragged them down. As for the television series re-runs having 30,000 viewer, they were very happy. However Chilam did not dare to predict the film's box office. They both said that if the film will perform well at the box office, Michael Tong Man Lung will be in the buff to thank the audience. Chilam even joked that he would help him remove his clothing, but Ah Sheh will be responsible for posting the video online. She also hoped that the audience would enter with laughter but leave with tears. Speaking of Myolie Wu Hung Yi's engagement announcement, Chilam and Ah Sheh both sent their blessing. Ah Sheh said, "Congratulations to her, I wish them growing old and gray together!" Chilam also mentioned that Tong Man Lung's pursuit of Ah Sheh back then. He said that they acted several times. Ah Sheh jokingly wanted to know what kind of action they took. If Tong Man Lung asks her out now would she agree? She said that she would be OK with a group.

Sister Ka Yin said that she was very appreciative of Ah Sheh and Chilam. Because the director originally arranged for her to bungee jump off the Macau Observation Tower, she was shaken for two weeks. After they found out they volunteered to the director to jump for her, for which she was very touched. She said, "Chilam is a nice guy, he didn't want anyone to give me too much pressure. When I found out I didn't have to jump, I really felt the load coming off me." They would continue to promote in Malaysia today in hopes of box office success.
Posted by hktopten at 7:57 PM