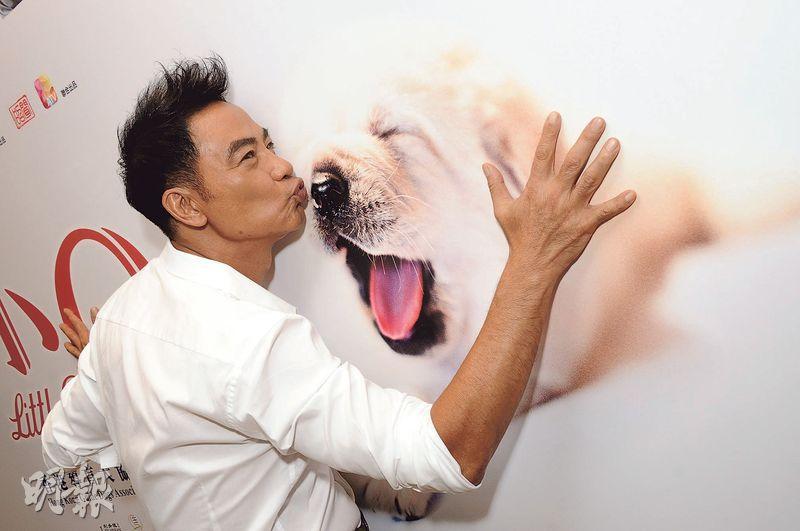 The Simon Yam Tat Wa starred film LITTLE Q (SIU Q) will soon open. Before the attack Brother Wa promoted the film. Brother Wa said that after 65 days with the guide dog Pudding, he did not want to part with it and planned to adopt it in a few years. He hoped that Pudding would have a chance to be nominated for Best Actress and Best New Performer. As for himself whether he would win Best Actor or not it did not matter.

The film LITTLE Q was adapted on the Japanese novel QUILL, THE SEEING-EYE DOG. The story was about a smart and cute Little Q under the care and training of a trainer become a qualified guide dog and ran into the Brother Wa played master. In their days together, Little Q brought its master from the bottom to a new life. Brother Wa said that in the film he played a ill tempered loner, a middle aged baker who due to sudden blindness became very helpless and very afraid. He even dragged the guide dog Pudding to the streets and abandoned it. After this scene, Pudding seemed to be mad at him. "The dog was mad at me for two weeks, but the character and the story needed to be like this."

He said that acting with a doggie was very hard because the dog did not know how to act. It had no idea with a camera or a mark was. In order to attract its line of sight, he thought of an idea. "Sometimes I would put cheese on my face and use the scent to draw in the doggie. Because of all the bad takes, my face and upper body were full of drool. Sometimes I also had to pretend I was one of them and bark like a dog. I even learned some dog language because dog needed to be attracted to sound."

Having played countless characters, Brother Wa this time played a blind person. Before hand he also went to prepare. He said, "The fear from not being able to see was very hard to perform. Earlier I observed blind people's behavior and their inner world at a school, I even did tests with a blindfold. They brought me to a place to train, told me how big the place was and what was in it. In 5 minutes I had to find myself out. I felt the fear, the helplessness, isolation and loss of sense of direction. I took that and injected it into the character."

In addition, Brother Wa also had a pair of special made contact lenses during the shoot. After putting them on he could not see anything except white. Whenever there was light they would absorb it and became very sharp to the eyes. Even the always tough Brother Wa could not help but complain, "It was the second time I wore contact lenses for a movie, to me it was very tough. I took them out as soon as I heard cut, but the contacts helped me a lot. Because I couldn't see I was able to achieve that helplessness, the lack of sense of direction and how nature being with the doggie was. During the shoot I fell and bumped into things." He also said that the most memorable was running into the streets to kill himself because he really could not see anything. Before the shoot and putting on the contact lenses he would clearly learn where his marks were and identify direction with the clock. The doggie would come from 3 o'clock, he would head toward 11 o' clock north. Looking back he was very afraid because he really did not know when a car would come. However during the shoot he could not worry that much.

After 65 days with Pudding, they built a deep relationship. Brother Wa admitted that he really missed it. Although Pudding was an animal he would like it to have a chance to be nominated for Best Actress and Best New Performer. Was he confident that he would receive a Best Actor award? Brother Wa said that the award would not matter because the film was filled with love, acceptance and loyalty. Everyone would be very moved after watching. Although he contributed a lot to the film, Brother Wa also thanked the director for permitting him to make this film, so he would be able to experience the love and the loyalty of the doggie even more. From another angle, when someone hit rock bottom at the most helpless and afraid he would need someone to talk to and animal to help him live again.

A dog lover himself, Brother Wa planned to adopt Pudding after its retirement. He said, "Pudding is now three, it still has several years. I thought about switching it out with another dog, but I couldn't. So I would have to wait for its retirement to adopt it." He also revealed that once he went to Cheung Sha Wan to see Pudding and learned that it was helping someone who was visually impaired. Its master was a masseuse. To keep from hindering it at work, he could only take a peek like father and daughter. Brother Wa even joked that now he no longer ate pudding.
Posted by hktopten at 1:54 PM