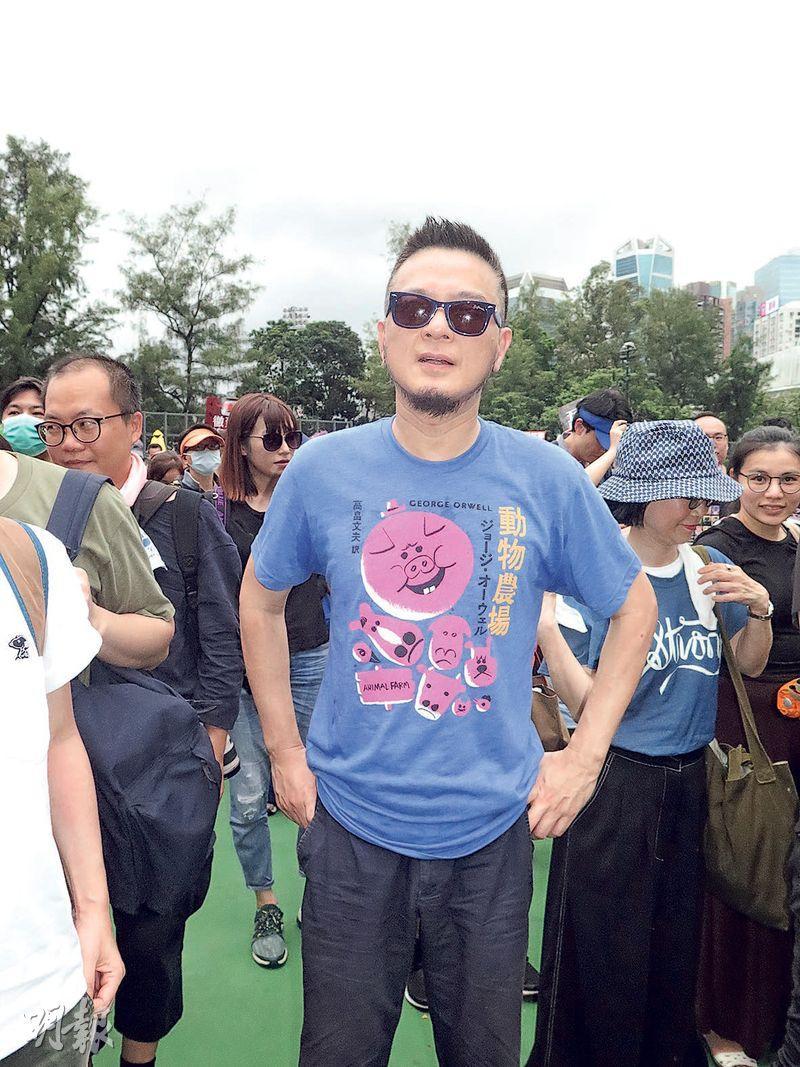 Anthony Wong Yiu Ming, Denise Ho Wan Si, Tommy Yuen Man On, Gregory Wong Chung Hiu and others yesterday participated in the protest. Wong Yiu Ming said that as long as the government does not respond to the five pleas, Hong Kong people would continue their protests. As for rumors of the Liberation Army's intervention rumors, he felt that they were threats against Hong Kong people. If the rumors were truly, they meant that the central government would destroy one nation, two systems. Ho Wan Si also felt that the Liberation Army rumors were a way to spread fear. She felt that the road of resistance would require a clear thinking and evaluation. About artists who expressed their patriotism, Yuen Man On said that since they did not stand on the side of Hong Kong people at this critical situation, they would not need to be remembered with any fondness.

Wong Yiu Ming yesterday appeared at Victoria Park in support. Speaking of the recent government announcement of multiple "candy distribution" financial relief policies, he pointed out that the people of Hong Kong would not be bribed. As long as the government does not respond to the five pleas, he would continue to march. Yesterday would not be the last time. As for the numerous rumors that the Liberation Army would intervene, he felt that it was not-so-smart idea to threaten citizens. If they were true, the central government would destroy one nation, two systems.

The Civil Human Rights Front's "end mob violence and police brutality" march request was not approved and changed to an event at Victoria Park. Ho Wan Si felt that the government was stripping Hong Kong people's rights, and the police at the same was using brutality to suppress and harm citizens. History would remember these events. She pointed out that the government and the police's use of abnormal methods to suppress people's voices, and Chief Executive Carrie Lam Cheng Yuet Ngor's elitist and arrogant attitude each time she appeared could not possibly calm the people. As for the military police's anti terrorism drill videos, Ho Wan Si said that they were acts of white terror, used to silence the people and spread fear. She felt that the road of resistance required clear thinking and evaluation.

Yuen Man On said that in the past week he did alot to spread the word online and call for even more Hong Kong people to take to the streets. "Today probably over 1 million people would come out, a conservative estimate would be 800,000 people. Even the pouring rain wouldn't stop everyone's determination, as everyone would cheer each other on." As for the growing number of artists expressing their patriotism, he said, "I think this phenomenon is very sad because many Hong Kong people grew up watching them, yet they knelt down for some gains and system. They have disappointed fans who have supported them over the years. You can go back on some things. Since under this critical situation they still decide not to stand with the people of Hong Kong, no one needs to remember them with any fondness."

Wong Chung Hiu yesterday distributed parkas and towels to people in Causeway Bay. He said that he did it out of his conscience and could live with himself, even if he would suffer Mainland internet violence.
Posted by hktopten at 7:04 AM