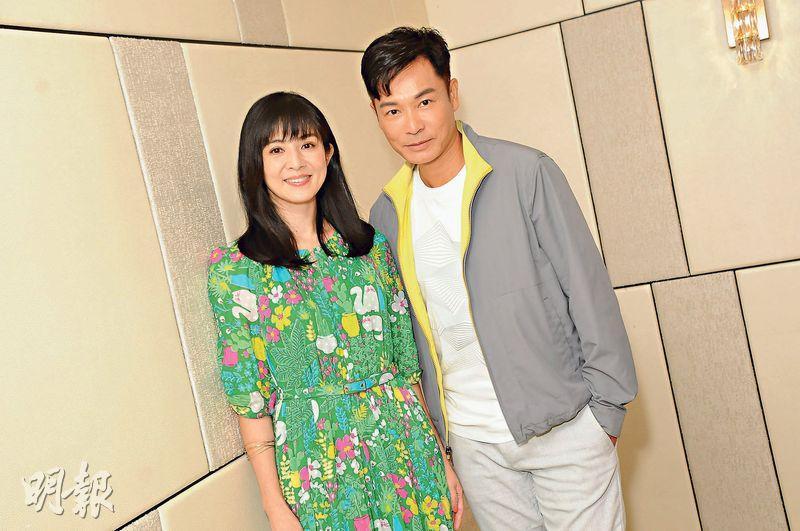 Roger Kwok Chun On and Charlie Yeung Choi Nei earlier promoted their film LITTLE Q (SIU Q) and shared their dog experience. On Jai said that he had a dog. His children even witnessed its death and cried a lot. Charlie felt that pets could teach children to face life and death.

On Jai looks back at two or three years ago before the dog passed away. When the children came home from school he told them to be prepared. "I told them the dog would go soon. At first we were fine, but we prayed. Children couldn't help but cry, which was good though as it was a suitable release." On Jai recalls, "I held back my tears, now I wouldn't have another. On the day when children witnessed my dog's death, I told them not to think it's fun to have a dog. If they do they have to be responsible."

Charlie feels pets can actually teach children to face life and death. She has two dogs. Back then because her sons were born prematurely they had to be quarantined. Thus she added a gate over the babies' room. She was afraid that the dogs would feel neglected after she had the babies so she would chat with them. "They are very little, they can't play with you yet. Just wait. Mommy still love you very much. They are great bodyguards as they guard the gate. When the babies cry they would notify us." She is very grateful that the children are now healthy and play with the dogs. Now she instead has to teach her sons not to pull at the dogs, to love them and be gentleman like with them.

Aside from dogs, On Jai and Charlie have another common topic -- parenthood. With a pair of twin sons Charlie recently ditched them for two or three days to promote the film in Hong Kong and the Mainland. She says, "I usually don't bring them with me to work, if I do I can't work." Her twins are already 2 and can walk and run. They love to climb up and down. Used to saying no to her sons, she now has learned to let go and let the children learn. "Now I wouldn't tell them no. Instead I would teach them and tell them to be careful when they climb. Because if I stop them and say no to everything, they would want to do it even more. I remember when they first climb the stairs, I would say no and they would still keep climbing. I might as well teach them to be more careful, of course I have to keep a close eye on them." With one son and one daughter On Jai agrees with Charlie and shares his experience. "Because children don't know what is no, I used to make that mistake too -- saying no and hurry up. Stuff like hurry up is not good, they are like curses. They don't know about the adult time concept, so they would be slow with putting on their socks and shoes. They are children, so they have no idea what hurry up is. Maybe they feel it is a curse."

On Jai's children are 11 and 8. On Jai also admits that he was free. Yet humans are always conflicted. He honestly says that when the kids are grown he would miss their childhood, as each stage has been different he would miss them all. Would he have another? On Jai says, "I can't keep thinking about it, what is in the past is in the past. (Ada Choi Siu Fun is pregnant again after so many years?) She is sharp, I have to applaud her with encouragement."

Speaking of his children On Jai becomes more talkative and reveals that his daughter has performance potential. After five or six years she can come out to sing and dance. Would he object to his daughter getting into the business? He said with an open mind, "I wouldn't, but I wouldn't explore it. I would let it be. (If your daughter wants to get into the business would you give her a hand?) If I can I would, she can be an extra behind me first. I would let her explore on her own. As a parent of course I want her to study first and worry about it after she finishes school. (How is her brother?) I haven't affected him yet, let's wait until he is a little older."

Charlie says that her twins are still little, so she has not seen their desire to perform yet. However when she and her husband see them interact, they look like they are performing. She says, "Twins are actually wonderful, they have a lot of chemistry. They push each other back and forth so you would think they are fighting, but they aren't. When they eat there are a lot to see too, as they would feed each other. They sound cute when I talk about them now, but when they are sick I am very worried because they would spread it to each other." The only child Charlie says that the twins already have company in her belly and now they have someone to grow up with. She is very envious.
Posted by hktopten at 7:44 AM