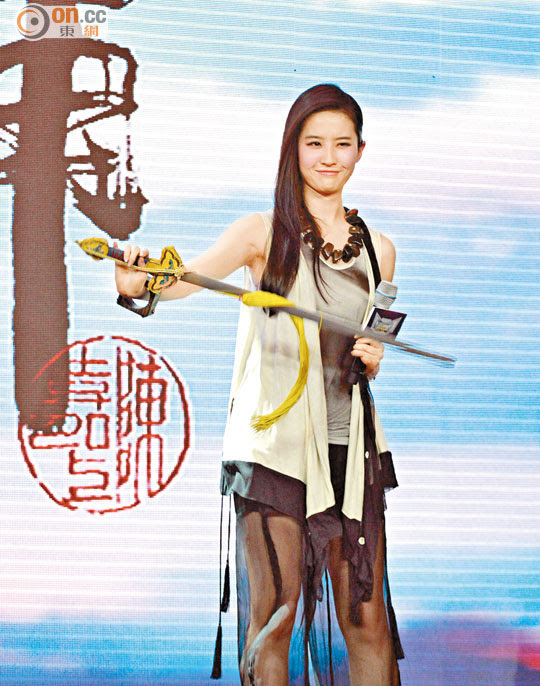 Gordon Chan Ka Seung last year made THE FOUR (SEI DAI MING BO) trilogy all in one breath. The eleven month long production made him more familiar with the actors, especially lead actress Liu Yifei. Gordon stated that they were full of chemistry. With a dance background, Liu Yifei had a handle on her fight scenes and looked convincing. No wonder Gordon praised that she could turn from a idol to an action actress at any time!

Director Chan Ka Seung's THE FOUR 2 is in release now. Following the first film's Mainland box office hit, Chan Ka Seung stated that he had "pressure". "Actually the decision to make a sequel was made a few days before the first film's release. The boss was very confident in the film and immediately started production on the second and the third films. Making them in a row, pressure was certain to be there. Because it cost 70 million (RMB) for one film, even if it made 150 million (RMB) it still lost a little. In addition the second film was 3D, the cost was even greater. However during this production, the entire team had great relationships. Although the process was very tough, everyone put a lot of effort into it, I am very happy to complete this."

Because of the 11 month long production in Hengidan, Gordon saw changes in Deng Chao, Ronald Cheng Chung Kei, Liu Yifei and other actors in the film. Gordon stated that Liu Yifei transformed. During the second film shoot he trusted her even more and they had chemistry. He said, "In one scene she had to do a dozen minute take straight, she did it in one breath. I am really happy to see her explosiveness. She wasn't an idol at all; when she worked on fight scenes, she fought very well too perhaps due to her dance background and not afraid of hard work. I am confident that she can handle a pure martial art action film."

Although the first film was a Mainland box office hit, actually Gordon still had something that was nagging at him. "Although this film was a hit in the Mainland, its Hong Kong box office was iffy. To me it's a setback. I am a Hong Kong director, I want to make a movie for Hong Kong viewers, but maybe this film had few Hong Kong actors and promotion. Thus I added (Eddie) Cheung Siu Fai, (Kathy) Chow Hoi Mei, (Ken) Low Wai Kwong and other actors in the second film, I wanted to put more Hong Kong elements back into it. I hope Hong Kong viewers will see it."
Posted by hktopten at 5:50 PM