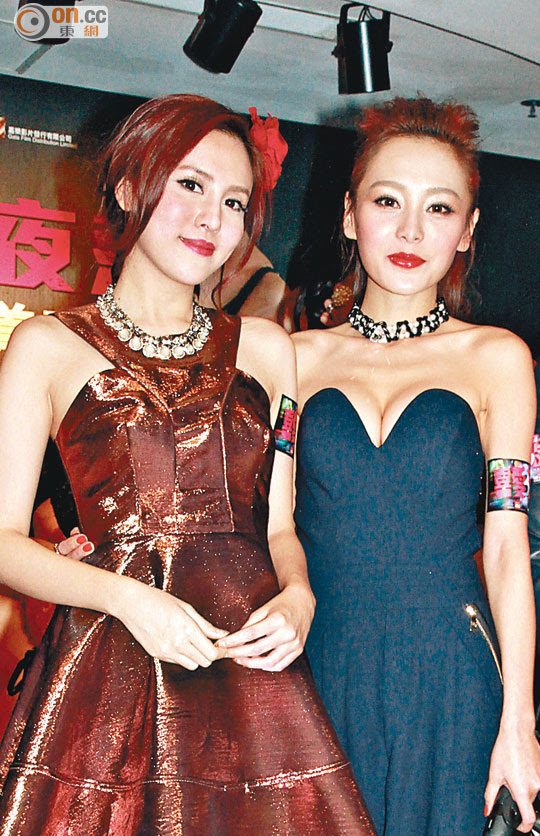 Jeana in the film played a couple with Lam Tak Shun and had a series of love scenes. She joked that they have already made a date to "observe the battle" and would hold his hand to prevent him from covering his eyes out of embarrassment. Was she worried that his rumored girlfriend Linah Matsuoka would be jealous? Jeana said, "No, it's just work. Although I don't have a boyfriend, I wouldn't act recklessly." Jeana normally had a habit to writing Weibo. Speaking of Hui Yik Nei being so tense that she had nightmares, Jeana joked, "How could she have nightmares? All I got a fantasy dreams."

Injuring her right leg earlier, Yu Kiu appeared in high heels for the first time after her cast was removed. She joked that it was her film premiere celebration. Did she invite rumored boyfriend Adason Lo (Law Lik Wai) to attend? Yu Kiu practiced Tai Chi and said, "Because of another film premiere at the same time, I believe the film company would invite other artists to watch. I also hope friends would buy tickets to support me. I only had 4 tickets and I gave them to my family. (Will you watch it with him?) It's fine with a group of friends."

Speaking of her first time with such a sexy performance, Yu Kiu said that it was just acting. Before the shoot did she ask her rumored girlfriend Law Lik Wai for permission? She said that when she took the role she did not ask the director about the film. During the performance she bared when she needed to. She did not ask anyone. With her boss she also acted first and answered questions later. Not answering is a type of an answer.

Hui Yik Nei said that this was her first film's premiere so she had to dress up. Inevitably she was a little nervous. Earlier she wrote online, "If you don't do anything shameful, you won't be afraid of knocks on the door in the middle of the night." She explained that because lately she constantly had nightmares, since she has not done anything bad she was not afraid. Did negative news affect her? She said, "Lately I don't have any negative news, even if I do I just laugh it off." She revealed that in her nightmares she was being chased and joked that perhaps she had too many suitors normally. Speaking of her gossip with Ha Wai Yu, she said that it was just a rumor. She also looked forward to her performance.

Ho Pui Yu yesterday attended a ribbon cutting ceremony. Speaking of being caught on camera crying and throwing bottles after drinking, she said that it was work stress. "I took several film roles for next years, including ghost films. After I made a ghost film earlier, I had several ghost attacks." She revealed that a male ghost to force a kiss on her, which added stress to her. She worried that next year she will attract phenomenon next year when she will work another ghost film. Reportedly she was offered HK$1.5 million for topless scenes. She said, "For now no one has approached me. I will consider it depending on the script, the co-star and the director."
Posted by hktopten at 7:23 PM