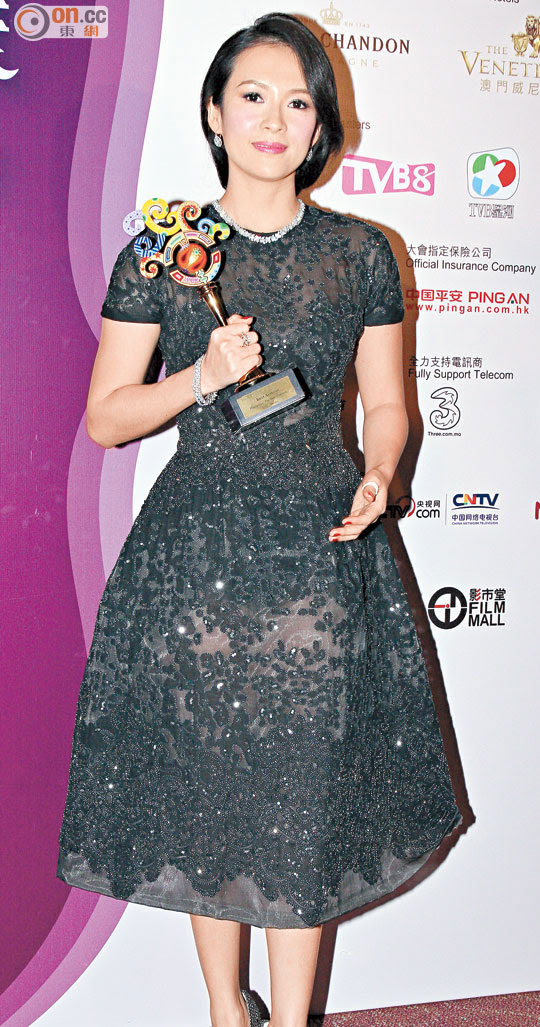 Zhang Ziyi with THE GRANDMASTER was the favorite to win the Asia Pacific Best Actor. She defeated JUVENILE OFFENDER's Lee Jung-Hyun, SO YOUNG's Yang Zishan, IN BLOOM's Lika Babluani, THE LUNCHBOX's Nimrat Kaur and ILO ILO's Angeli Bayani. Zhang Ziyi said, "Thank you to the event and the jury, I also have to thank Director Wong Kar Wai and Leung Chiu Wai. Each time I have worked with Leung Chiu Wai I have improved. THE GRANDMASTER took over three years to make, the biggest reward was learning to be "willing". The cast and the crew only out of love for this profession were willing to provide their heart and time. Winter is a great season, aside from receiving happiness I also received an award." During the award ceremony Zhang Ziyi was nowhere to be found in the audience until the moment of the announcement when she finally took her seat with an entourage of 6 assistants.

Zhang Ziyi said, "(Andrew) Lau Wai Keung made fun of me for taking three years to make a movie. Three years' time is unimportant. The most important is that everyone remembers the character, which is something that is very worth being proud of. The award is only a bonus." Was the happiness she referred to on the stage love? Zhang Ziyi sweetly smiled and said, "I was already very clear." With THE GRANDMASTER she won 4 Best Actress awards: the Golden Horse Award, the Huading award, the Asia Pacific Screen Award and the Asia Pacific Film Festival Award.

Lee Kang-Sheng again defeated Leung Chiu Wai and Cheung Ka Fai to win Best Actor. He took the initiative and shook Cheung Ka Fai's hand, and Cheung Ka Fai congratulated him. Lee Kang-Sheng said, "Another surprise, this time I guessed would be smooth sailing. Thank you to the jury and everyone. I am very happy, a little touched. Because the Asia Pacific Film Festival is different, this is international. This time I probably won't be called a surprise. Earlier STRAY DOGS went to many world film festivals but few has seen it. Thus I was surprised when I won. I want to thank my father who passed away over a decade ago. Although I don't make a lot of movies, he has always silently supported me. Only after his passing did I discover a video of my first movie in his collection."

The Golden Horse Best Supporting Actress Yeo Yann Yann again won with ILO ILO. She defeated UNBEATABLE's Crystal Lee, SNOWPIERCER's Tilda Swinton, SO YOUNG's Maggie Jiang Shuying and TO MY DEAR GRANNY's Lin Mei-Hsiu. She was so emotional that she instantly hug director Anthony Chen. She said, "Thank you to the event, the jury and everyone who is related to ILO ILO. Because of their hard work, th actors were able to show their best selves to the audience."

LIKE FATHER, LIKE SON won Best Picture and Best Director to become the big winner. With 9 nominations, THE GRANDMASTER only won two awards. Best Supporting Actor went to THE LUNCHBOX's Nawazuddin Siddiqui. Mumbai film THE LUNCHBOX's lead actor Irrfan Khan received the "Asia Pacific Film Festival Special Achievement Award", but due to illness he was unable to attend. However he still sent a video to thank the event and the jury.

Maria Cordero earlier had a hysterectomy. After resting for a few months she performed for the first time last night. Throughout her entire performance she did not look like she just had a surgery. On the other hand Kay Tse On Kay went off key as soon as she opened her mouth when she performed WEDDING INVITATION STREET. THE WAY WE DANCE (KONG MO PAI) actors and Lollipop F performed a choreography and mixed Tai Chi with dance.

Two Best Actresses Anita Yuen Wing Yi and Cecilia Yip Tung presented the Best Actor Award. Yuen Wing Yi admitted that she really wanted to present it to her friend (Cheung Ka Fai). Yip Tung said, "Now Cheung Ka Fai has already been promoted to Jerk Fai!" Yuen Wing Yi joked, "Anyone who has a friend of mine is a jerk!" Yip Tung after seeing the winner said, "Your good friend has to work harder." Yuen Wing Yi could not help but look disappointed.

Anthony Wong Chau Sun and Charlene Choi Cheuk Yin presented the Best Actress award. Chau Sun conversed in sign language, Ah Sa played question and answer herself. "I know Best Actress has to have acting abilities, which I have! She has to be pretty, I am too! If she has to have a figure, I obviously have it too!" Everyone cracked out.

Lo Hoi Pang who accidentally used foul language at an award show presented an award with Cheng Pei Pei. He said, "Lately Hong Kong people really like to use foul language." Cheng Pei Pei immediately stopped him as she was afraid that he would "test the mic" again. Lo Hoi Pang said, "But they like hearing it!" The entire venue applauded.