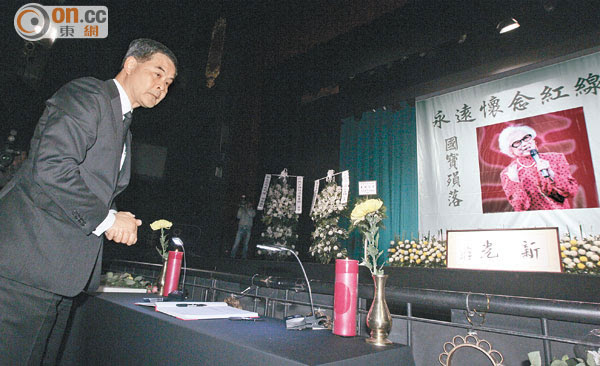 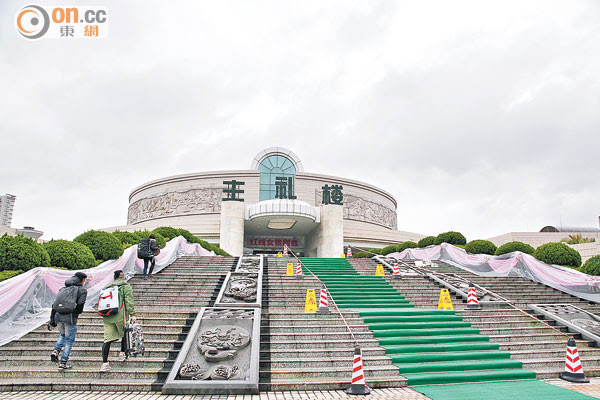 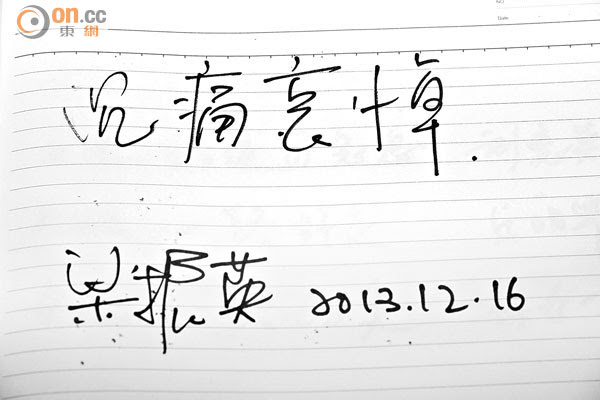 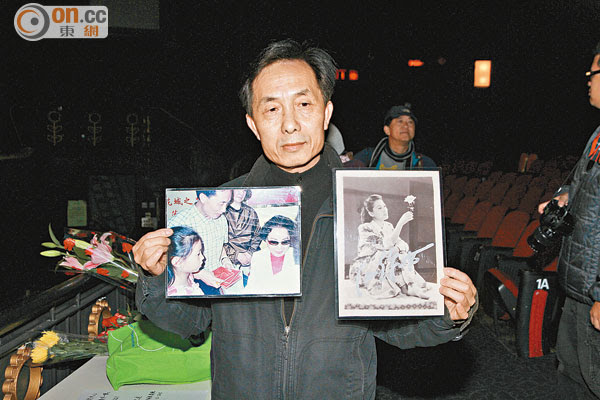 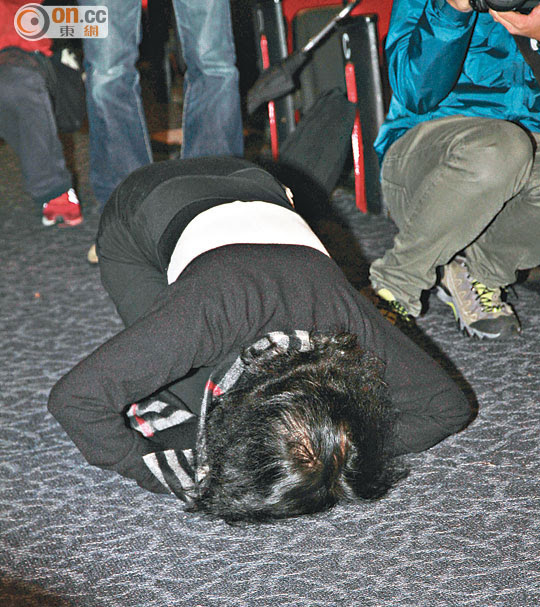 Yesterday when reporters arrived in Guangzhou, Sister Nui's funeral decoration has already started. Two stairways outside the venue had pink lace and flowers; due to rain, they were covered in plastic bags. Outside the altar were the words "Hung Sin Nui Farewell Ceremony" in pink. Workers erected giant stills of Sister Nui outside, including her Wang Zhaojun costume look.

Workers were decorating the hall as well, as floral arrangements filled both sides. The plaque in the center read "Deeply Missed" in pink. The memorial ceremony photo was of a silver haired, smiling Sister Nui in a white jacket and a red shirt. The center of the hall was a sea of flowers, full of pink and white ones. Sister Nui's classic RED CANDLE TEARS and LYCHEE SONG were played. The hall had a giant screen, which will play Sister Nui's classic performance videos today at the funeral.

The Sunbeam Theater yesterday began a Hung Sin Nui memorial that runs until today, a public memorial for people to present flowers and sign the signature book. The memorial took place from 9AM to 3PM, with Sister Nui's photo in the middle of the stage of the theater, a banner that read "FOREVER MISSED HUNG SIN NUI" and the couplet of "National Treasure Falls, Nui Voice Endures". The stage was decorated with white and yellow flowers, in the middle of the "Sunbeam" calligraphy that Sister Nui personally penned last night. Chief Executive C.Y. Leung, Home Affairs secretary Tsang Tak Sing and Fok Chun Ting also sent floral arrangements. The memorial played continuously Sister Nui's classic ZHAOJUN TO THE FRONTIER. Outside the theater Sister Niu's performance video played on television for many fans to stop and enjoy.

Yesterday many fans came to pay their respect and remember. Fan Mr. Tsang brought a Sister Nui personally autographed photo with him. He said that several generations of his family have been Sister Nui's fans. "In 2001 I brought this photo of Sister Nui from her youth to her autograph session in Mongkok. At the time she really liked this photo and asked me to make her a copy. Unfortunately I have been too busy to it." He deliberately brought the autographed photo copy to the event, hoping to send it through Sunbeam Theater to the Guangzhou Hung Sin Nui Art Center.

Fan Ms. Tam after paying her respect was reluctant to leave, as she stared at Sister Nui's photo and kept shedding tears. She said that she already liked Sister Nui when she was little. "I have liked Sister Nui for 60 years. I thought she was too strong. My favorite was her ZHAOJUN TO THE FRONTIER. This son was very meaningful. I wrote in the signature book 'Farewell, Unforgettable'."

Wong ha Wai around 2PM came to pay her respect. She said that she has known Sister Nui for 60 years. "Sister Nui's former husband Ma Sze Tsang was my matchmaker, so I treated Sister Nui like my lady matchmaker." Aunt Wai Ha praised Sister Nui as worthy of respect. "Sister Nui overcame hardship and gave her heart and soul to charity fund raising. I saw Sister Nui in recent years but didn't sense that she was sick. Thus her passing was very sudden. I miss her very much and am very heartbroken." Aunt Ha Wai said that she injured her leg and might not attend Sister Nui's funeral today.
Posted by hktopten at 8:35 PM