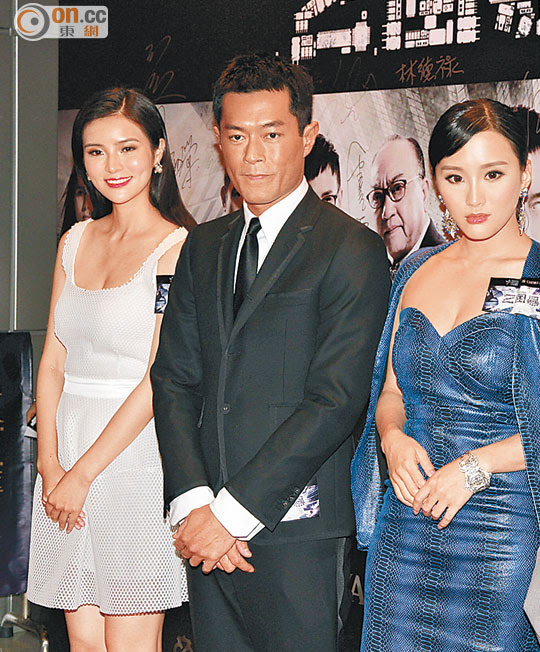 The actors shared their experience on the stage. Due to Sing Kwan's less than fluent Cantonese, Goo Jai joked, "Honestly, I have no idea what she said at all." Later he explained that he was not making fun of her lack of fluency but the volume on the microphone. He also pointed out that Cantonese pronunciation was harder, he thought Sing Kwan already put in quite an effort. Earlier she would ask him when she did not understand something. Did Goo Jai ask her for Putonghua help? He said that he did, they were learning from each other. Goo Jai's Putonghua pronunciation was made fun of before, has he improved a lot? He said that he would learn, if he would not then he would not know.

Speaking of being between two sexy stars, Goo Jai joked that DaDa's arms could not wear sleeves. From winter to summer they were the same way. Did he feel very unnatural, when he put his arms in front during the photo opportunity? Goo Jai said, "My arms are either in front or in the middle." Both OVERHEARD 3 (SIT TING FUNG WON 3) and THE Z STORM would be released simultaneously, Goo Jai said that the films were of different genres so he would not worry. Z's subject would be the Independent Commission Against Corruption.

DaDa admitted that she was not deliberately sexy. She only hoped to successfully lose weight because now she is pretty fat. As for Goo Jai making fun of her lack of sleeves, she pointed out that this was the trendiest Korean fashion.

Derek Tsang Kwok Cheung left soon after the show began. He revealed that his grandmother passed away and services were being held two nights ago at Po Fook Hill. Two nights ago Kwok Cheung was asked when he and girlfriend Venus Wong Yik Man will wed. He awkwardly said, "So soon? It's been less than a half year." This time working with Goo Jai, Kwok Cheung praised him for taking great care of new comers and juniors despite how cool he usually looked.
Posted by hktopten at 4:28 PM