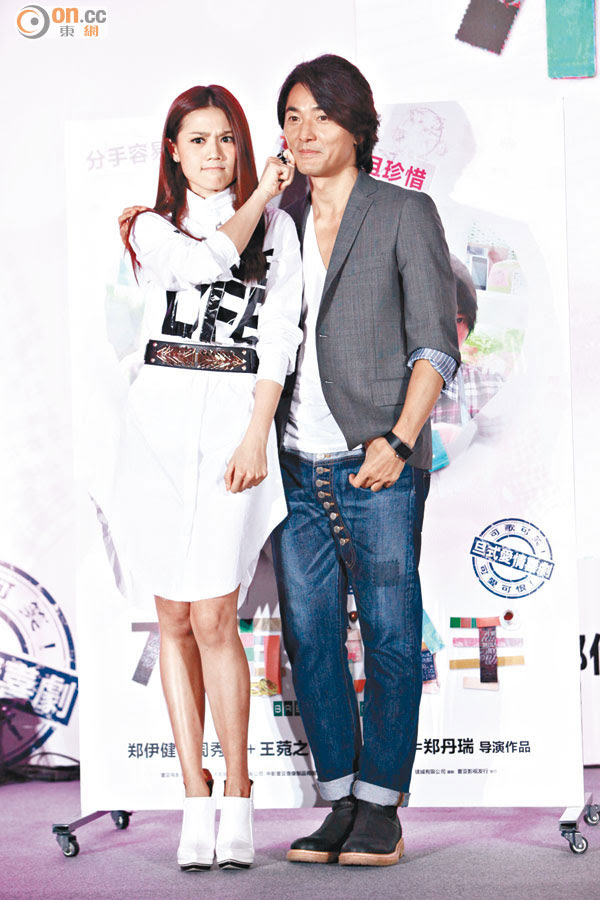 The Media Asia film BREAK UP 100 (FUN SAU 100 CHI) yesterday held a Beijing press conference and announced its August 1 Double Seventh Festival nation wide release. Director Lawrence Cheng Tan Shui and stars Dior Cheng Yi Kin and Chrissie Chau Sau Na appeared. At the event Ekin and Chau Sau Na both talked about the topic of breaking up. Cheng Tan Shui will lead Ekin, Chau Sau Na and Ivana Wong Yuen Chi on a ten city national "Never Say Break Up" love therapy committee operation to help couples that have broken up, are facing a break up, or are unwilling to break up.

Ekin and Chau Sau Na's characters in the film were "Mr. Definitely Wrong" and "Ms. Always Right". In the poster and trailer, Chau Sau Na and Ekin demonstrated the "strong woman weak man" couple condition. Was he resemble "Mr. Definitely Wrong" in the film? Ekin said that they have similarities, like in life he is very much like a child and needs others to take care of him. He pointed out that two people in love need to rely on each other. She would take care of his shortcoming and he would satisfy her needs. He pointed out that in a relationship, love came first, then came reason. A lot in love could not be explained with reason.

Chau Sau Na did not agree with her character. She felt that a woman could be independent and her own way of thinking, but she did not need to force her man into a corner at every turn. This way both would have a very hard time. She said, "Girls want guys to take care of them too, but some guys never grow up. A relationship requires wisdom, a lot of problem can't be resolved with just arguing and breaking up. Problems in love often are hard to differentiate between right and wrong."

At the event, the trio began an enthusiastic discussion about the "strong woman weak man" relationship in the film. Ekin said that now women in society are more and more capable and have more and more control, thus they become stronger and stronger. This actually is a more common phenomenon, so under this situation, men would become weaker in comparison. He felt that this was an expression of respect and love. Yet in a relationship, often might does not make right and weak is not definitely wrong. Actually right and wrong would be hard to tell.
Posted by hktopten at 2:08 PM