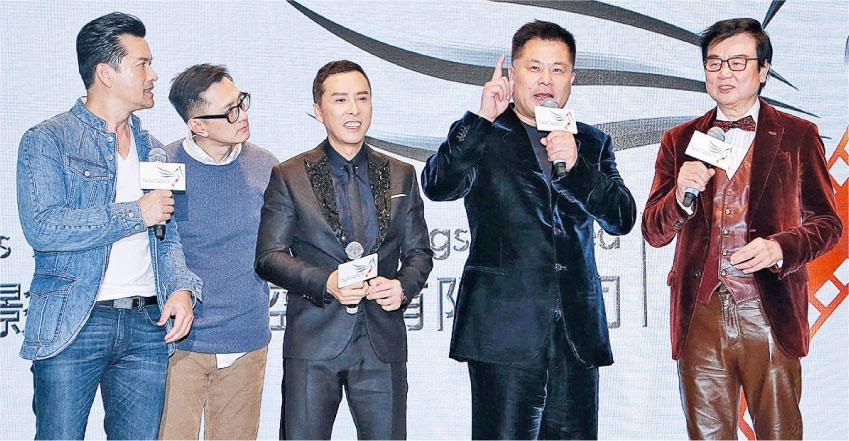 The Donnie Yen Chi Tan starred new film IP MAN 3 was a hit in Hong Kong. The film's producer Shi Jianxiang came to Hong Kong to celebrate with the team and revealed that the film has been confirmed for a March 4th Mainland release. He had no fear of rampant piracy and was full of confidence in the film's Mainland box office performance, as he spent 10 million for everyone to guess the film's total box office and promised to use the internet, film and finance as the global distribution platform to promote Chinese film.

Shi Jianxiang even offered HK$ 10 million to ask everyone to guess IP 3's final box office. Because IP 3 has already broken many records, the team looked forward to its Mainland release very much. Some predicted 1.8 billion and some even 2 billion, but the result will have to wait until the Mainland release.

Speaking of the confirmed Mainland release date of March 4th, everyone worried that the internet and the rampant piracy would affect the Mainland box office. Shi Jianxiang however sang another tune as he confidently said, "Earlier the Taiwan film OUR TIMES also postponed its Mainland release, piracy spread in a small area but with the word of mouth its Mainland release received decent box office." In the film Yen Chi Tan and Mike Tyson's 3 minute fight scene became the focus of the entire film. The original idea came from Shi Jianxiang, who flew to the U.S. to invite Tyson to guest star.

Shi Jianxiang stated that he really liked the IP MAN films not just because of the story but also its spread of national spirit and culture. "This type of culture needs more viewers' understanding and familiarity, for people to know at the greatest level. This isn't the responsibility of private entrepreneurs but also their duty. As a Chinese, promoting the national culture is what every one of us should do. Ip Man gave me strength, actually what we are distributing really is not a film, but a type of Chinese spirit." He also pointed out that he would use the internet, film and finance to safeguard a Chinese film box office legend. "This year I will massively invest in Chinese film and at the same time bring in Hollywood cash production and technology to fully elevate Chinese film production quality, only this way can Chinese film truly go global."

Some viewers feel IP MAN 3's popularity is because it has both action and drama more than its two predecessors! Whether the portrayal of street boxing champion Tyson's punch or Max Zhang Jin and Chi Tan's "Wing Chun vs. Wing Chun", the action designs had a lot of thought put into them as they displayed Wing Chun martial arts of six and a half point pole, Bart Cham Dao and the like. Chi Tan and Tyson's 3 minute intense and exciting 3 minute duel was heart pounding. Chi Tan also said, "Sparring with Tyson is like gambling with your life!"

The dramatic part also holds its own. This time through the Lynn Xiong (Hung Doi Lam) played Mrs. Ip Man Cheung Wing Sing's cancer, the audience was made to consider the meaning of life. Kung fu master Ip Man faced with his wife's cancer could only be helpless in fate. In the film Ip Man chose to spend her final moments with his wife, which was real and touching. Later she carried her ailing body to accept the challenge from Zhang Jin's Cheung Tin Chi with Ip Man, which also fully showed her understanding and support of her husband's love of the martial arts. Only with an understanding wife like this would Ip Man be able to become the grand master of a generation.

IP MAN 3 in Taiwan, Malaysia and Singapore was released simultaneously and made NT$ 140 million, 25 million RM and S$ 6 million. IP in March will open in the Mainland. Donnie Yen Chi Tan's CROUCHING TIGER HIDDEN DRAGON: THE GREEN DESTINY will also open during the Lunar New Year. With his full schedule Chi Tan who would celebrate the holiday on a family vacation in past year this year only planned to rest for a few days with his family and help his wife Cissy Wang with her soon to give birth sister Wang Yuanyuan.
Posted by hktopten at 9:08 PM