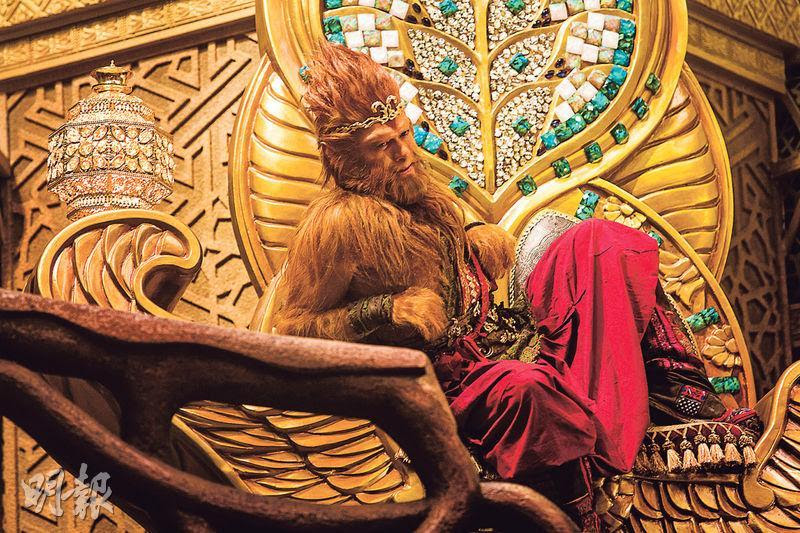 Recently Aaron Kwok Fu Sing has been working on the new film THE ETERNAL WAVE in the Mainland while promoting the Lunar New Year film THE MONKEY KING 2 (SAI YAU GEI ji SUEN NG HUNG SAM DA BAK GWUT JING) all over. His schedule has been jam packed! Last week while working on a stunt for ETERNAL he aggravated an old injury when he landed. He immediately returned to Hong Kong for treatment but did not rest much as he rushed back to work four days ago to promote MONKEY on Jiangsu Satellite television. Then he returned to Shanghai to continue the ETERNAL shoot.

Sing Sing's manager Siu Mei on social media confirmed Sing Sing's injury and gave an update to the media and his fans. "Actually I wanted to cancel some jobs, but Sing Sing insisted on completing the MONKEY KING promotions that he promised to do. He completed the performance despite the pain, then returned to the ETERNAL WAVE team. This is truly a type of professionalism!"

For his all new Sun Wukong image, Sing Sing before training three months before the shoot in hopes of merging the "Heavenly King" and the "Monkey King" into one. He stated that he was rather ambitious as he hoped to bring about the most complicated Sun Wukong with the most variety of personality in film and television history. "This is an Eastern super hero than is stronger than Iron Man." Director Soi Cheang Po Shui praised Sing Sing as "top notch" with interpreting Sun Wukong's body language and eyes. "Sing Sing's eyes are the most able to move the audience, from his eyes you can read his all new elevation of this character."

This time Sing Sing had the most fights in his 30 year long film career, action director Sammo Hung Kam Bo designed many masculine, powerful yet complex action scenes. Sing Sing while wielding the magic staff suffered enough as he bruised his leg numerous times. However he joked that it felt great. Co-star Gong Li also praised Sing Sing for being tough. "During the break he still carried that magic staff around and practiced like crazy!"

Sing Sing's Pretty Monkey King costume was the design of a Hollywood class special effect make up artists. Everyday he spent seven hours to "transform". Each strand of hair was glued onto him, which challenged his patience. The way cool Sun Wukong truly "could not lose", even the Venerable Tang Monk Feng Shaofeng dubbed him the "most handsome Pretty Monkey King in history".
Posted by hktopten at 5:58 PM