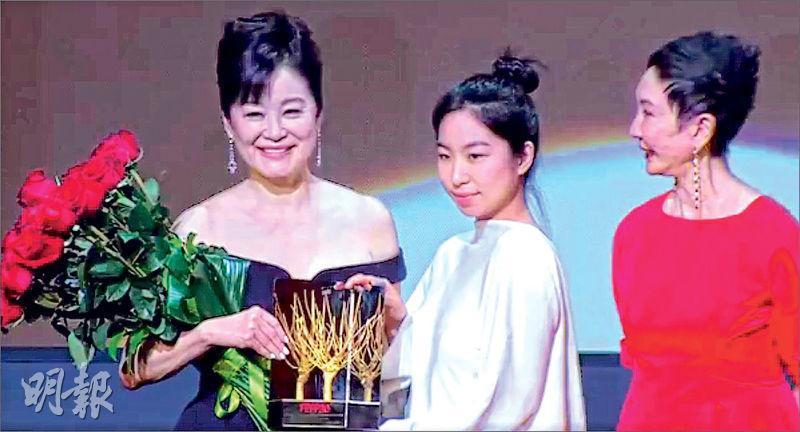 Aside from the award, Udine Far East Film Festival also planned a Lam Ching Ha film retrospective and selected some of her classic films including the 1977 film that completed its restoration in Taiwan, CLOUD OF ROMANCE. The film will hold its European premiere there for European viewers to catch a glimpse of this film industry great beauty on the silver screen.

Lam Ching Ha received the award from the hands of Shi Nansun. Shi Nansun herself was the 17th Golden Mulberry Award recipient. This time she again went to Italy with her friend for the opening ceremony and the Golden Mulberry Lifetime Achievement award presentation. Lam Ching Ha's daughter Eileen Ying Oi Lam secretly flew to Italy to give Mama a super surprise! Lam Ching Ha felt very happy and touched, as she prepared to have an Italian feast with her daughter to celebrate.

Lam Ching Ha said about her Golden Mulberry Lifetime Achievement Award, "CHUNG KING EXPRESS gave Italians Sabrina and Thomas a dream 18,000 miles away from Hong Kong as they successfully founded the Far East Film Festival. This year is the Film Festival's 20th anniversary. As a star of CHUNG KING EXPRESS, I am fortunate enough to receive this Lifetime Achievement Award here. I believe this means a lot to me, to Wong Kar Wai, to the Far East Film Festival's Sabrina and Thomas. The Udine Film Festival is the greatest news for Far East film." She also gave special thanks to people she worked with like Chiung Yao, Soon Tsan So, Yok Teng Heung, Tsui Hark, William Chang Suk Ping and Shi Nansun.
Posted by hktopten at 7:52 PM