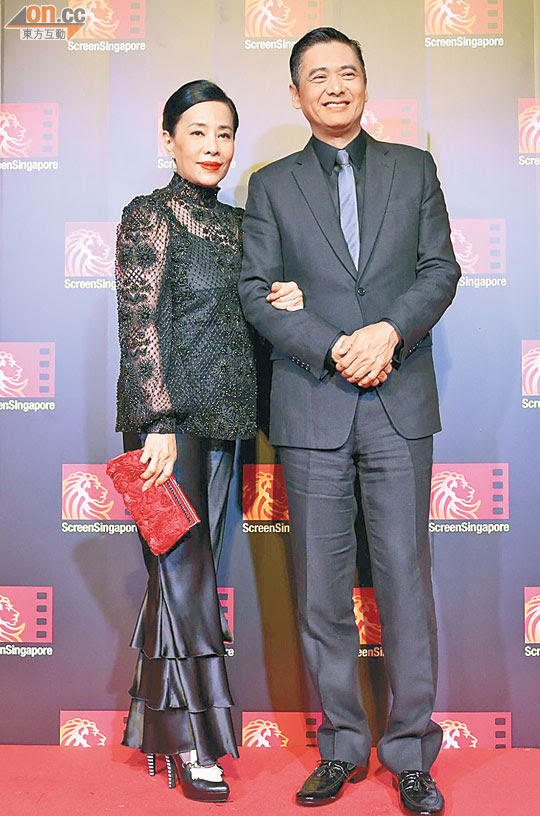 The film THE LAST TYCOON (DAI SEUNG HOI) earlier held its premiere at the Singapore Film Festival. Chow Yun Fat and his wife, Yolanda Yuan Quan and Feng Wenjuan along with producer Andrew Lau Wai Keung and director Wong Jing were among the attendees. Huang Xiaoming was absent due to his leg injury. Fat Gor had quite a flair, even with Fat Soh next to him he still openly flirted with girls.

Fat Gor in the film had relationship scenes with Yuan Quan and Monica Mok Siu Kei. When a female reporter asked him about the romantic scene experience, he jokingly publicly "wrote a ticket" and asked her to leave her card. He would call her for a candle lit chat at night.

Fat Gor is a Singapore son in law. When he promoted in Singapore he joked that he hid in the hotel. He did not dare to go out because he was afraid that he did not treat his wife well enough normally and was worried that his wife would find someone to avenge her. Fat Soh was used to Fat Gor's jokes. When asked about how she felt about her husband's intimate scenes, she helplessly said that she did not mind. Fat Gor said that at first he was anxious that viewers would not like THE LAST TYCOON, when the film ended with thunderous applause he finally breathed a sigh of relief. He bowed to the audience in appreciation.

Fat Gor said that the most exciting scene during the shoot was the Nanjing Road explosion scene, with a plane fly over and the scene was as grand as a firework display. During his kiss scene with Yuan Quan he felt the heat like the one from the explosion scene. He enjoyed that very much as well.

In the film he had many crying scenes. Female viewers were moved to tears too. As for praises for his convincing performance, Fat Gor joked that because the set was filled with smoke, his eyes teared up. In addition the director said that this scene was very important, if he did not perform well he would not receive the rest of his payment. Thus he could only cry with all his might.
Posted by hktopten at 9:53 PM