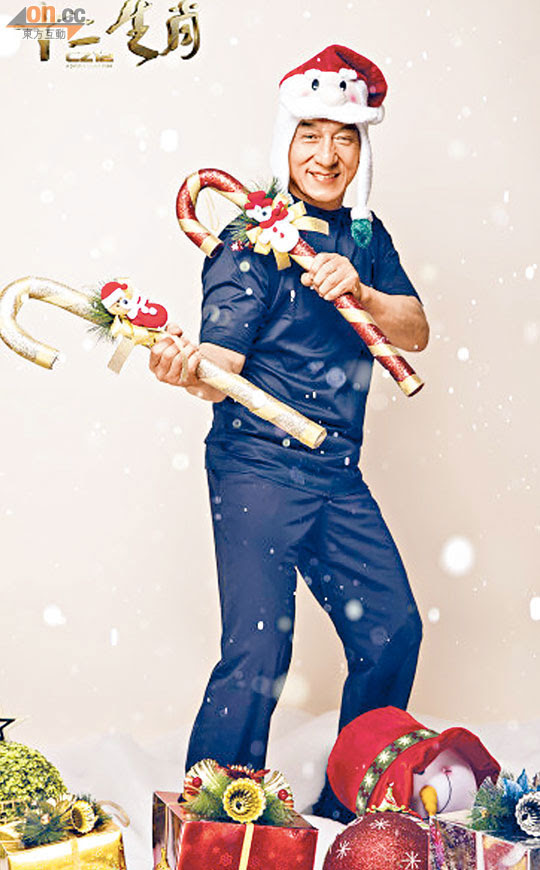 The Jackie Chan new film CZ12 (SUP YI SUN CHIU) broke 200 million yuan RMB on its first weekend in the Mainland box office. Aside from Jackie Chan's usual thrilling action scenes, many people's focus was on "Mrs. Chan" Joan Lin (Lam Fung Giu)'s 1 second cameo. In the film with long hair to her waist Lam Fung Giu embraced the completely injured Jackie Chan. It could be considered the couple's most intimate scene in the public. No wonder Jackie Chan said in an interview, "My greatest idol is Lam Fung Giu!"

Jackie Chan's 101st film CZ12 recently has been released. The film company yesterday posted a "Dragon Phoenix Together For Christmas" special short film, the surprise scene that "Mrs. Chan" Fung Lam Giu guest starred in. Jackie Chan said that to accommodate his wife Lam Fung Giu he moved the entire set from Beijing to Hong Kong. At first he only arranged for Lam Fung Giu's back to appear on screen, in the end she faced the camera for 1 second. Jackie Chan said, "Many have been considered for this character, (Maggie) Cheung Man Yuk, Gong Li, Zhang Ziyi and others. I believed the result would have been a pleasant surprise but not necessarily as shocking as it is now. Lam Fung Giu from the beginning has rejected my request and even called me crazy. Because she has retired from film for years, she was not entirely used to facing the camera. Later I promised to only shoot her back, after that she was only willing to shoot three shots. I persisted and beg for the scene that everyone sees now, I spent an entire year to coax her into it."

With his wife's 100% support, no wonder Jackie Chan was all sweet. Recently he was asked online who his idol was. He replied, "Too many, the world has many directors and actors whom I like, but right now my greatest idol is still Lam Fung Giu." He revealed that his son Jaycee Chan (Fong Cho Ming) originally was an U.S. citizen, later he gave it up to apply for a Chinese citizenship.

Recently some in the Mainland questioned the operation of Jackie Chan's charity fund after accepting a large sum donation. Jackie Chan yesterday clarified online, "My charity fund does not charge any management cost, all management cost is my personal responsibility. I don't know if the world still has this type of zero cost fund, I am very appreciative of the public and the critics' supervision, but I hope that they would draw a conclusion with actual facts. Otherwise such untrue noise would confuse the public and keep many potential donors at bay. If someone truly uses charity for illegal acts, I would be the first one to throw him in jail!"
Posted by hktopten at 6:16 AM