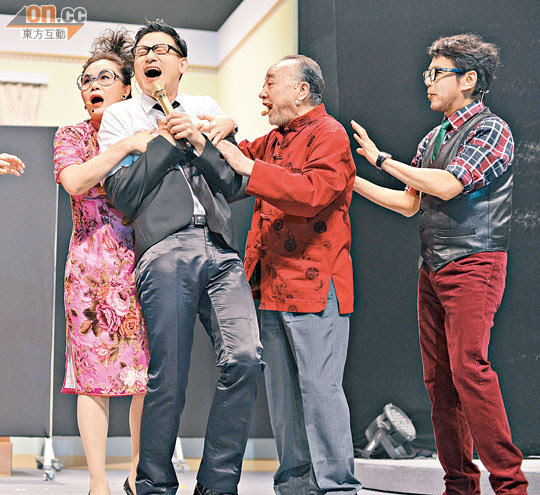 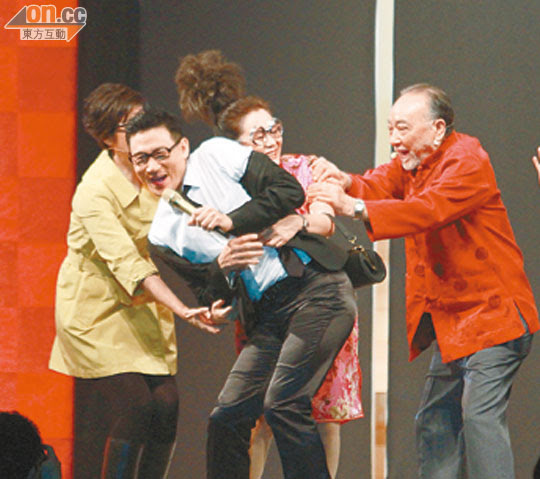 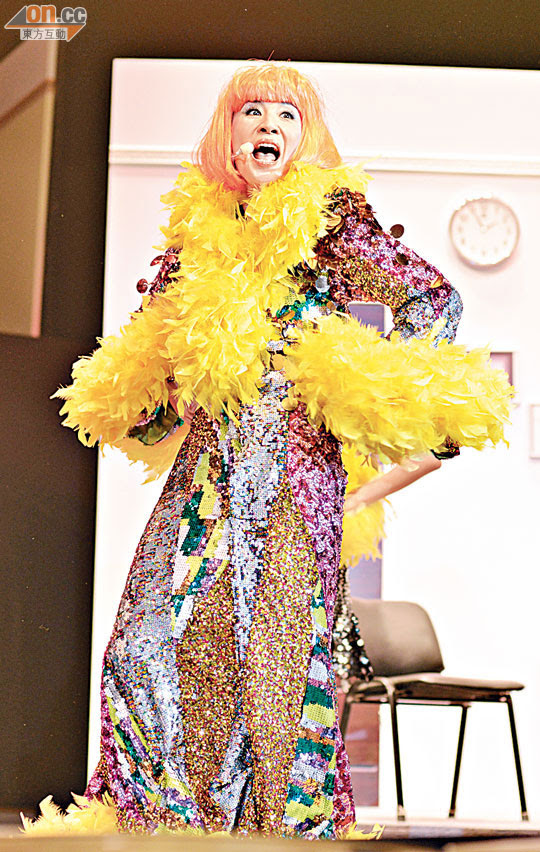 The 3 show run of SHRIMP CRAZY FAMILY II ended two nights ago. Lo Hi Pang had a wireless microphone malfunction and took a microphone out of his pocket to deliver his lines. Meg Lam Kin Ming made fun of him for "taking his thing out". He replied, "Everyone has a thing!" Guest Sandra Ng Kwan Yu appeared in her GOLDEN CHICKEN (GUM GAI) costume. She grabbed Lo Hoi Pang to play "Lo Hoi Pang mic check". Annie Liu On Lai tried to stop her. "His mic is already broken, it can't break again!"

Jacky Cheung Hok Yau danced and sang MESSY HAIR. Lam Kin Ming praised, "Song God, you are pretty good at dancing!" Hok Yau joked, "I am pretty good!" Lam Kin Ming immediately reached out to hug and grab him in an attempt to take off his jacket, Hok Yau was so threatened that he escaped from the scene.

Eric Tsang Chi Wai appeared as the 55th Asia Pacific Film Festival president to present the Best Supporting Actor award to LIFE WITHOUT PRINCIPLE (DUET MING GUM)'s Lo Hoi Pang. Lo Hoi Pang was so emotional that he had tears in his eyes, but he also joked, "I am just old and have eye gel! After many years of toiling, I am not only able to break out of Hong Kong but also Asia, thank you!" Everyone celebrates his December 21 End of the World 71st birthday, Chik Mei Chun and King Kong also celebrated their January birthdays as they participated in cake cutting.

Lo Hoi Pang joked that he thought the Best Supporting Actor award would be very ugly, once he got it in his hands he thought it was very pretty. He decided to display it somewhere noticeable at home. "This is the best 71st birthday present." Lo Hoi Pang revealed that he continued to receive film offers, as long as he got hired he would work on the film. However he did not deliberately increase his rate. He was afraid that after his raise he would not get to play any more. The entire performance raised HK$1.8 million for the Hong Kong Movie Star Sports Association Charities Limited. Nat Chan Pak Cheung accepted the check on behalf of the charity.

Speaking of Kenny Wee (Wong Ho) finally promised to shut up, Chi Wai said, "An ending would be good. Actually the incident was very minor, it just got bigger and bigger. Now it shrinks down again." He said that the police has not contacted him yet.
Posted by hktopten at 3:21 PM