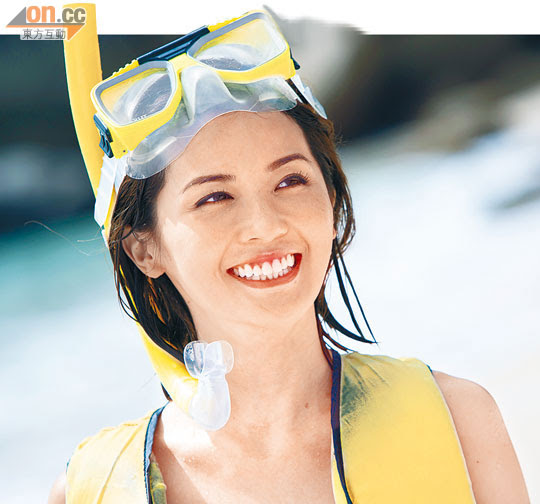 Charlene Choi Cheuk Yin and Dior Cheng Yi Kin in the Universe new film MY SASSY HUBBY (NGOR LO GUNG NG SUN SING) played a couple that has been married for years. The film was shot on location in Queensland, Australia and received the local tourism bureau's sponsorship. Ah Sa said, "Last year I went there for a photo book shoot. The location was truly very pretty and very suitable for the ending of the film. So I recommended it for everyone to go again!"

Upon her return, Ah Sa said that she felt very relaxed. "Around 4PM I would already feel very sleepy. I listened to the sound of the waves and was very relaxed. There I didn't have any phone reception at all, it's exactly like a paradise. I didn't have a care in the world and no trouble at all!"

In the ending, Ah Sa wore shorts and a tank top with snorkeling gear, but because the production was rushed and the local storm season, she and Ekin were unable to dive in the Great Barrier Reef. They both screamed, "What a shame!"
Posted by hktopten at 3:10 PM