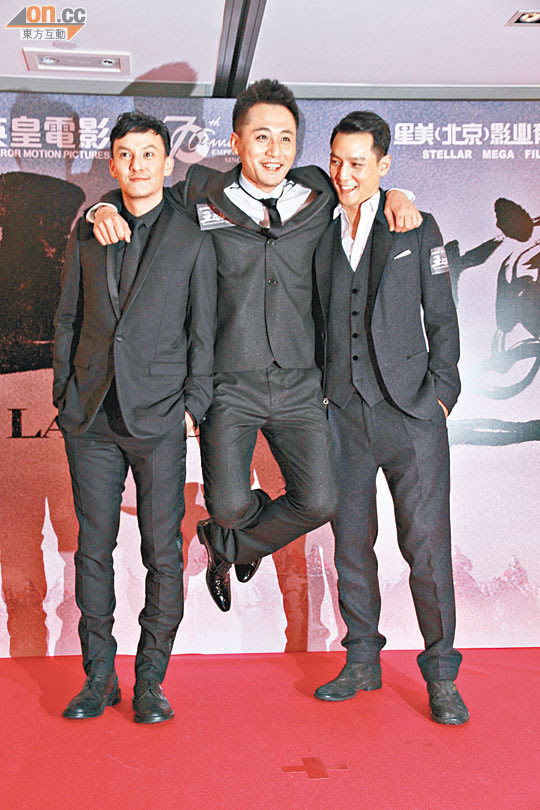 Chang Chen, Liu Ye, Daniel Wu (Ng Yin Cho), Qin Lan and director Lu Chuan's film THE LAST SUPPER (WONG JI SING YIN) two nights ago held a premiere in Causeway Bay. Wai Ying Hung showed her supported and said that she will return to Hong Kong for a television series in January. The soon to be father Ng Yin Cho talked about his wife's recent condition. Chang Chen was working on the post production voice work for THE GRANDMASTERS (YUT DOI JUNG SI) and said that he was already used to Wong Kar Wai's pursuit for perfection production style. The production was worth spending three years on.

Ng Yin Coh said that his wife Lisa S. suffered nausea from her pregnancy and he did not dare to invite her to watch the bloody scenes at the premiere. She only did not get sick when she ate, thus she has become very large. He said, "My wife's chest and rear both grew larger, which I have never seen before. I like them very much, but I can only look and not touch; she didn't want her shape to become like this, but for the baby she still accepted it." Ng Yin Cho said that he wanted his wife to have two children and stop. He said, "With two children they don't have to be lonely, I am afraid that I would worry about my daughter in the future."

Chang Chen was very happy that his film THE GRANDMASTERS has become the Berlin Film Festival opening film, but at the end of January he would have to work on Hou Hsiao-Hsien's new film and did not know if he would be able to attend. He recently worked on post production voice work for THE GRANDMASTERS but he did not know when it would be released. Although his part took three years, he did not ask for triple salary. He said, "During the period I worked on other films. Since it wasn't our first collaboration I was already used to it. 2046 took 5 years. Slow work produces detailed product. The pursuit of perfection is worth the long production."

Wai Ying Hung said that in January she will return to Hong Kong for a series, but she and TVB had no contract. Will she dock with Ricky Wong Wai Kei? Siu Hung did not deny anything and said, "This time the contract has a lot of freedom!" Did she get a heavy offer? She smiled and said, "I didn't say anything." Siu Hun since her brother Austin Wai Tin Chi's passing changed and wanted to stay in Hong Kong more. In the past 3 years she worked overseas and felt lonely. Thus she will have dinner with her family on the rumored end of the world and treated her home like Noah's Ark. She would not look for a companion until after that. She said, "It's not important that he makes less money, as long as he doesn't need me to raise him. I am very low maintenance."
Posted by hktopten at 1:44 PM