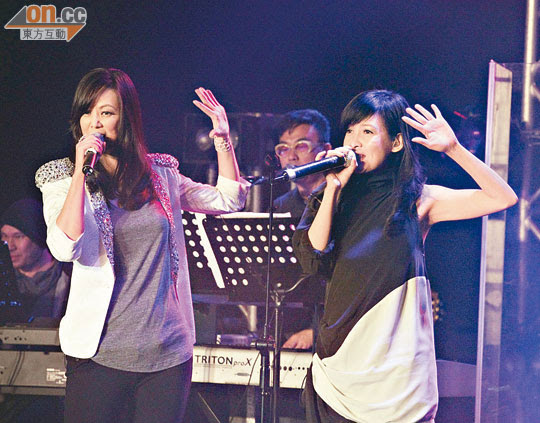 Linda Wong Hing Ping two nights ago performed a concert. She not only performed her own hits but also Faye Wong and Eason Chan Yik Shun songs. She invited her good friends Vivian Chow Wai Man and Vivian Lai Shui Yan to perform with her. When she and Chow Wai Man sang SAILOR MOON she asked to coordinate with the choreography. Chow Wai Man said, "We still have to sing this song as adults? However for over a decade this is the first time that we sing this song together. I am afraid when we are done everyone would faint!" Wong Hing Ping hid behind her musicians to pull up her pants. She also performed Taiwanese folk songs. Because they had many homophones of Cantonese foul language, the audience cracked up.

Wong Hing Ping was moved to tears many times. She mentioned her father Jimmy Wang Yu's unfortunate stroke last year. Later when she sang her late mother Jeanette Lin Tsui's favorite song she succumbed to tears. "I wasn't the good girl in everyone's eyes. I was very rebellious to Papa's strict demands. Papa doesn't want me to be a reporter, so I went to study journalism. Papa doesn't like boys to call my house, so I call the boys." When someone screamed "dating", Wong Hing Ping was afraid of mentioning Wang Yu's objection to her dating Kevin Cheng Ka Wing. "I didn't plan on talking about dating, actually Papa doesn't want us three sisters to marry at all."

Wong Hing Ping said that she prepared for the concert for two months as she did not want to sing off key when she got emotional. Yet when she looked at the audience's expressions she could not help herself. As for Wang Yu's health after his stroke, Wong Hing Ping said, "I don't want him to take the flight so I didn't invite him. Hopefully in the future I will invite him for a larger scale performance. Cheng Ka Wing sent a floral arrangement? I still owed him dinner, I will find him when I am not as busy." She said that she did not vote for Cheng Ka Wing for the TVB Best Actor.
Posted by hktopten at 8:18 PM