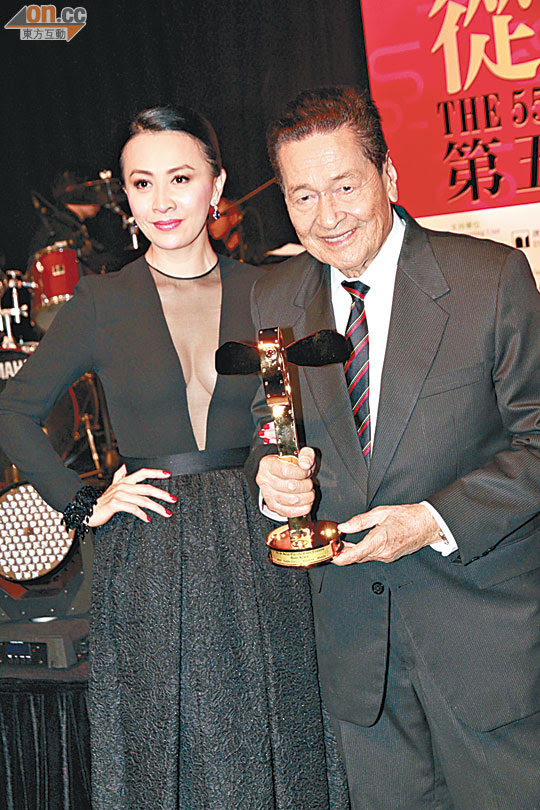 The 55th Asia Pacific Film Festival awards took place two nights ago in Macau. Hong Kong films finally won only 4 awards. The Best Actor battle between Lau Ching Wan and Tony Leung Ka Fai fell against the favorites, but one of the jury members Carina Lau Ka Ling and planning committee executive director Eric Tsang Chi Wai at the celebration stated that they were pleased with the result. They stressed that the result was fair and balanced as they uniformly praised Manila film BWAKAW lead actor Eddie Garcia's outstanding performance. He absolutely deserved to win the Asia Pacific Best Actor.

Ka Ling was very satisfied with the result. As for favorites Ching Wan and Ka Fai both lost the Best Actor, she said that the result was unanimous among the jury. During the evaluation process they had no argument, only during the "Best Picture" the jury stopped twice for the members to consider clearly. She also praised Kwai Lun-Mei as a very outstanding actress with a better and better grasp on her characters.

She revealed that she has planned to party on Christmas but she would not plan to ski overseas. This time she has been working hard so she only wanted to properly rest and enjoy the holiday cheer. She said, "(Tony) Leung Chiu Wai still has worked on THE GRANDMASTERS (YUT DOI JUNG SI) post production, he should be done already. Actually I don't know whether it is truly done, Wai Jai doesn't know either. I think even Wong Kar Wai doesn't know. We are all just waiting."

Although Chi Wai was disappointed that neither Ching Wan nor Ka Fai won Best Actor, he felt that Eddie Garcia truly deserved the award so he was very pleased with the result. Different nations' representatives also said to him that the results were very fair and they were very pleased. Due to the numerous award winner absence, Chi Wai stressed that the results were not known before hand and there was no requirement for winners to attend; he did not want to deliberately invite people. He thought that absence was fine, as it showed how fair the event was.
Posted by hktopten at 3:25 PM