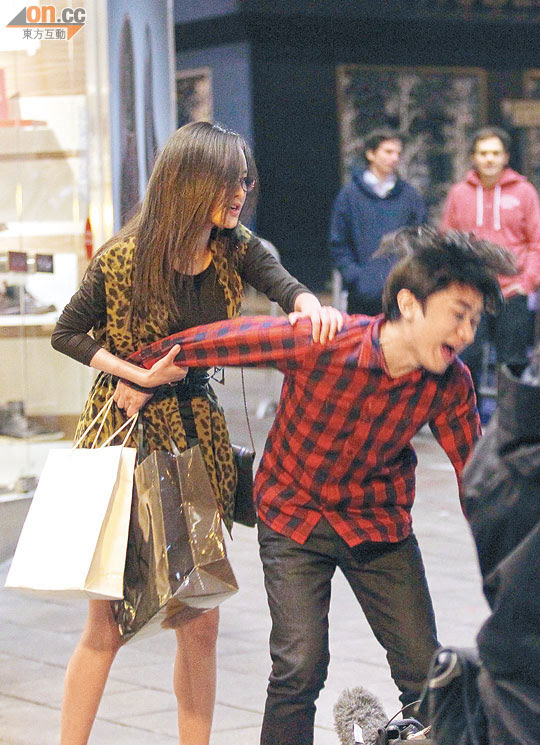 Wong Cho Nam two nights ago worked on his new film at Central. In the film the little guy and the tall "Jing Girl" Tong Fei were walking arm in arm. They suddenly argued and Tong Fei got rough with Cho Nam. After half a hour of beating his suffering finally stopped!

Cho Nam two nights ago with Tong fei worked on the Wong Jing produced, Wilson Chin Kwok Wai directed new film BLACK COMEDY (HAK SIK HEI KET) on Queen's Road Central at Central. Although it was late night the shoot still attracted many onlookers. Due to the winter chill, both rehearsed in down jackets. In a short dress Tong Fei even put on long pants to keep her legs warm.

Director Chin Kwok Wai explained to the script to Tong Fei, who listened attentively and nodded. When the shoot began, Tong Fei immediately took off her long pants. Cho Nam without his jacket was shivering.

In the story Cho Nam carried numerous shopping bags and originally was happily walking with Tong Fei, but they suddenly argued. Tong Fei began to attack him, then put him in an arm lock and elbow his back. Cho Nam looked like he was in pain and began to scream.

Perhaps the director did not feel Tong Fei was vicious enough and asked someone to demonstrate again. Tong Fei observed attentively. After watching the director's demonstration they tried another take. The human punching bag Cho Nam took half a hour before completing the beating scene.
Posted by hktopten at 2:56 PM