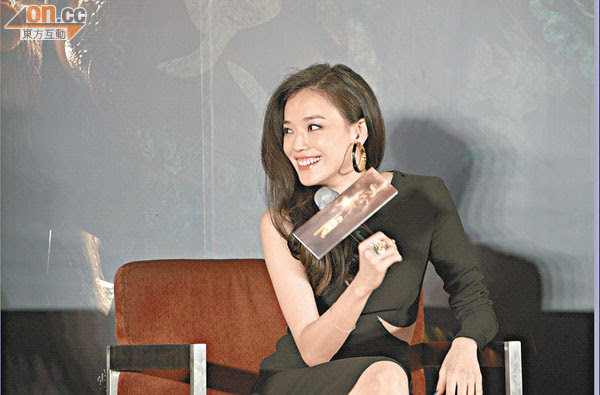 The Stephen Chow Sing Chi directed film JOURNEY TO THE WEST (SAI YAU GONG MOR PIN) will be released in the Lunar New Year. Yesterday he along with actors Shu Qi, Wen Zhang and Huang Bo attended the Beijing press conference. Sing Yeh praised the 3 actors for their great acting. They were filled of comedy senses, with them he could almost retire from comedy! He was still able to direct though. Shu Qi revealed that when she was named the lead actress, she admitted that she was a little surprised and agreed to perform right away.

Chow sing Chi at the Beijing press conference joked, "Wen Zhang is the new king of comedy. With him, my comedy life has ended; Huang Bo is already a king of comedy, with him, Wen Zhang's and my comedy lives have ended; with Shu Qi, we can all get lost. She absolutely is the comedy fighter jet."

Shu Qi admitted that she wanted Sing Yeh to show of a little of his acting in the film but she was disappointed. Sing Yeh was asked when he would personally perform a comedy for everyone? He continued to praise the actors and said, "With them around, what would I play? I can almost retire." Yet he admitted that he would not stop directing.

Shu Qi was named the lead actress to play the demon taming heroine. She said that she was a little surprised. "One day Sing Yeh suddenly called me and asked if I could be his new film's lead actress? At the time I was so surprised I jumped. Later I found out it was for JOURNEY TO THE WEST, a costume and action films. I thought it would be a lot of fun so I agreed right away. I grew up watching Sing Yeh's movies. I understand his style very well, working with Sing Yeh on a comedy has been my dream for years." Sing Yeh said, "Oriignally I wanted to take Shu Qi to dinner to invite her, because I thought Shu Qi has always played pretty characters she probably would have no interest in comedy; in the end, Shu Qi was very interested in the comedy, I didn't have to take her to dinner."

In the film Shu Qi had many action scenes, most of which Sing Yeh personally demonstrated. Shu Qi said, "No wonder everyone said Sing Yeh likes kung fu, he actually really knows kung fu well!"
Posted by hktopten at 3:21 PM