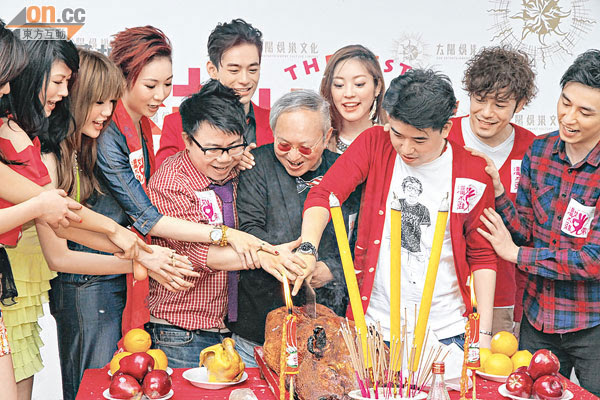 Jacqueline Chong Si Man and Linah Matsuoka yesterday attended their film KAU NUI BUT LEI 3 HING DAI production start ceremony. Recently linked to director Patrick Kong (Yip Lim Sum), Chong Si Man graciously posed for photos and even appeared in a super low cut dress. Chong Si Man said that she and the director were just friends and neighbors. She never thought about developing a relationship. She said, "I truly can't feel I am being courted, maybe I am slower in this area. For now we are just friends." She revealed that in the film she and Sammy Sum Chun Hin would be a pair and they had a car rocking scene. She said, "I don't have any bottom line, as long as we are not doing it for real then I am fine. However in terms of sexiness, in the film I would seduce Hanjin Tan (Chan Woon Yan) in lingerie, so I would ask his wife to supervise. Then I can relax and perform and won't need to explain excessively later." Yip Lim Sum also denied that he and Chong Si Man were dating. He even asked her to choose an outstanding piece of lingerie for the bed scene.
Posted by hktopten at 2:14 PM