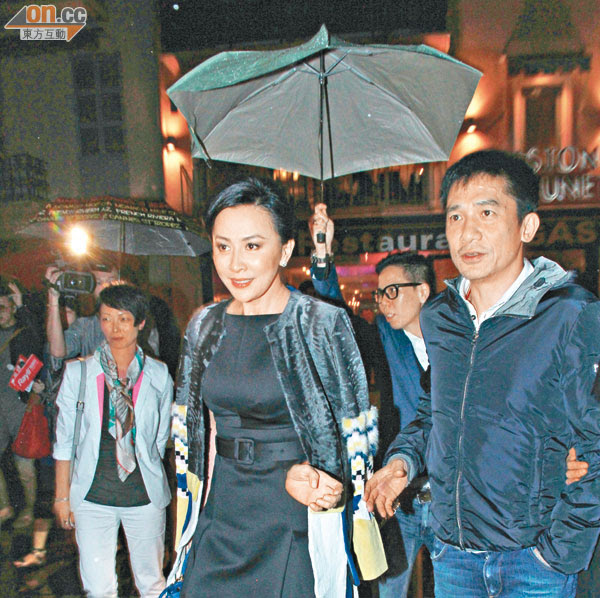 Currently in Cannes, Tony Leung Chiu Wai, Carina Lau Ka Ling, director Ang Lee, Chen Kun, Shi Nansun and others met at a seaside restaurant for dinner. Wai Jai and Ang Lee after working together on LUST, CAUTION rarely saw each other, this time they had a rare chance to catch up overseas. Wai Jai expressed hope to work with Ang Lee again.

Wai Jai and Lau Ka Ling after arriving in Cannes caught up with friends there before walking the red carpet. Aside from the Oscar winning director Ang Lee, they also met with Chen Kun, Shi Nansun and others. They had dinner at a seaside restaurant. Chen Kun with his assistant left first, then Ang Lee stepped out of the restaurant.

Since the film LUST, CAUTION, Ang Lee and Leung Chiu Wai rarely saw each other. He said that this time they talked casually and were very happy. Will they have a chance to work together again? Ang Lee said not right now.

Speaking of Zhang Ziyi also being in Cannes, he said, "Last night at an evening I met with Zhang Ziyi, which was very pleasant. After working together I feel that we have quite a connection, so when I saw them I was very happy and hoped to work with them again. However, it would depend on Zhang Ziyi."

After 1 hour, Leung Chiu Wai and Lau Ka Ling stepped out of the restaurant. Wai Jai said that he has not seen Ang Lee for a long time and would like to work together again very much. Will he be resting all year and not making a movie? He smiled and said, "Yes, I want to rest properly."

Will he take the chance to travel? Wai Jai said that this trip was to support his wife Lau Ka Ling. Will he wearing matching clothing on the red carpet? He laughed, "That's not necessary, right?" When they ran the restaurant rain came down. Wai Jai seemed to be THE GRANDMASTERS (YUT DOI JUNG SI) possessed as he would rather get wet and let the ladies get into the vehicle first.

Lau Ka Ling's film BENDS (GOR GAI) was selected for the Cannes Film Festival Un Certain Regard segment. With her husband Leung Chiu Wai accompanying her, her confidence was increased. BENDS' trailer was unveiled in Cannes. In the film she had a ballroom dance scene and looked very convincing. She also had a scene in which she was on a bed.
Posted by hktopten at 5:19 PM