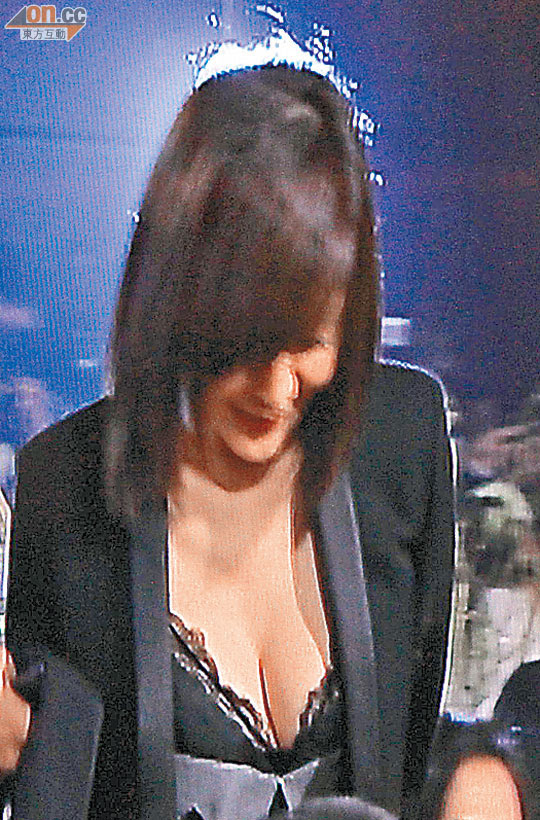 Two nights ago was the 7th birthday of Faye Wong and Li Yapeng's daughter Li Yan, although Li Yapeng claimed that his daughter was not present actually Li Yan arrived already. Faye Wong held her daughter and sat next to Zhao Wei, no wonder she did not perform. Only when Zhao Wei was calling an auction she went on stage to help. Many stars donated their money and effort. Zhao Wei won her bid for a Japanese artist's work WARM NORTH POLE with 1.28 million. Kwan Chi Lam with 1.2 million won a sculpture GAME. Shirley Cheung Yuk San donated 300,000 and donated artwork for the eleventh auction item that was sold for 3 million.

With an opening bid of 3 million, Zeng Fanzhi's work received a starting bid of 5 million from Mainland star Deng Chao, then a man in a white shirt bid 30 million and wow the crowd. Li Yapeng dragged the white shirted man to the stage. Actually he was the rich Mainland businessman Qian Fenglei who immigrated to Hong Kong. Li Yapeng joked that his nickname was "Chin Dor Dor". "Last year, 'Chin Dor Dor' was already the bid king of Smile Angels. He offered 20 million RMB for a jade Goddess of Mercy. This year I didn't feel right about asking 'Dor Dor' to come. I only asked him to sit quietly and not to donate money." Qian Fenglei said, "I work for a living. I am from Ningbo, if I don't donate to Smile Angels, who would I donate to?" When Li Yapeng announced the amount raised he joked that he was dizzy from drinking too much wine and asked the host to help and read it. The evening raised 56.196 million. After the event, Li Yapeng put his arm around "Chin Dor Dor" and left. He happily raised a victory sign and pouted, "I am very satisfied with the result. I hope to motivate even more Hong Kongers to support the foundation."

When Eason Chan Yik Shun performed, he said that he and Faye Wong belonged to the same manager so Faye Wong was like a big sister to him. He revealed that Charles Heung Wa Keung and his wife donated 1 million to support his performance. Mrs. Heung also donated 2.48 million for a Goddess of Mercy statue. "I know the hospitals need a lot of money. I don't want just Mainlanders to donate money and put Hong Kongers to shame. So I have to donate too!" Kenny Been (Chung Chun To) who performed with his daughter joked, "My daughter hasn't finished her homework yet, so she was very nervous when she went on the stage. She has to retire from music!"

Miriam Yeung Chin Wa and Real Ting Chi Ko two nights ago called the auction of a gold necklace. They even sang SMALL CITY BIG EVENT acappella. Although Ting Chi Ko was all red from singing, Tsang Bo Yi joked that someone wanted to donate money for him to stop singing. Finally Chin Wa performed with Richie Jen (Yam Yin Chai). The necklace went to Deng Chao for 1 million. Chin Wa made fun of her husband, Sometimes I suspect that he loves singing more than me!" Ting Chi Ko claimed that he forgot the lyrics. The 2009 Miss Hong Kong Tong Xiaoyan won the bid for the Emme Wong Yi Man donated diamond watch for 1 million. Back then due to a variety of negative news she suddenly resigned from the pageant. Now she is working on Mainland series.
Posted by hktopten at 3:38 PM