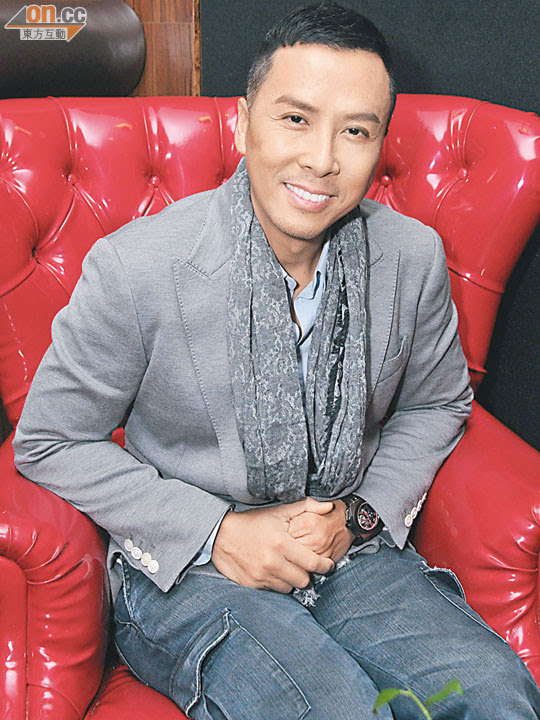 Donnie Yen Chi Tan has endless film offers, but in order to support the film industry he only added a suitable amount salary for ICEMAN 3D (3D BING FUNG HUP). After ten years of marriage with his wife Cissy Wang, he said that everyday has been very romantic. He even called himself "the strongest and the most romantic in the universe".

"The Strongest in the Universe" Yen Chi Tan promoted his films at the Cannes Film Festival. Speaking of all the troubles with his film ICEMAN 3D like the snowstorm in the Changbai Mountain and the film needed to be split into two parts for release, Chi Tan only added a little salary to support the film industry.

Chi Tan did not deny that. "Sometimes you can't be so tight with every cent. I only hope the audience will like it and I can answer to them. If the film will be a big hit, the film company will be able to give me a big lai see then." In addition, due to the snowstorm delaying the Changbai Mountain location shoot, Chi Tan personally called Emperor boss Albert Yeung Sau Sing and asked for a two month delay on the Emperor Motion Picture YUT GOR YUN DIK MO LUM so he would be able to focus on ICEMAN 3D. As for rumors that Wang Baoqiang's role in YUT was originally Aaron Kwok Fu Sing's, Chi Tan said, "I am not sure, Wang Baoqiang and I have known each other for years. I admire him very much. He is not only outstanding in a comedy. I look forward to working with him and (Charlie) Yeung Choi Nei very much."

This year is the tenth wedding anniversary of Chi Tan and his wife Cissy Wang. Earlier Cissy stated that she will shoot a sexy wedding photo series with his husband. Chi Tan admitted that although he was busy with work, he still will take time off to be with his wife. As for sexy wedding photos, he had reservation. "What is there to shoot! At most we can just shoot each other with our photos and not save them on the computer. Actually if two people are good together, everyday can be very romantic. I am a very romantic person, not only am I the strongest in the universe, I am also the strongest and the most romantic in the universe!"

Reportedly a Hollywood film company is interested in investing HK$800 million to remake Akira Kurosawa's SEVEN SAMURAI with Chi Tan, Zhang Ziyi and George Clooney. Chi Tan admitted that he has been in negotiations for the film that wanted him to work with Ziyi and George Clooney, but he was uncertain about the details. He only knew that it would be an Akira Kurosawa film remake. He said, "If it really is a SEVEN remake I would look forward to it very much, because Kurosawa was a director who I admired."
Posted by hktopten at 6:12 PM