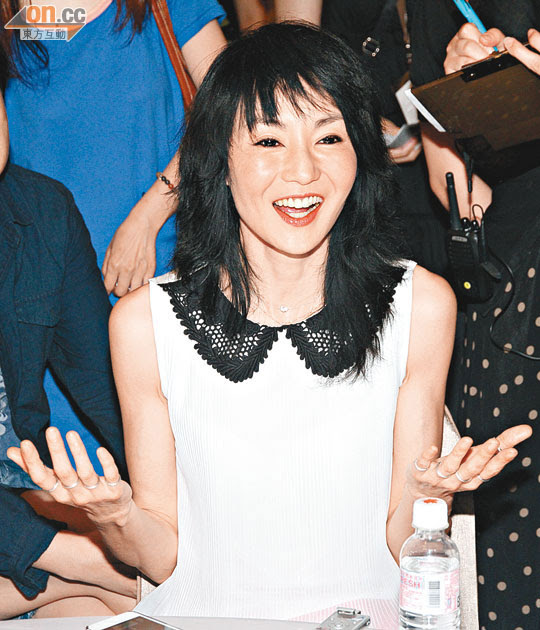 Yesterday Cheung Man Yuk was asked about Leung Chiu Wai not being the jury chair, she joked that she will not be the ambassador as she only came for Wai Jai. Cheung Man Yuk has served on the Cannes, Berlin and Venice Film Festival juries. She was interested in the Golden Horse jury chair job and asked more about the three stages of the judging process and when to watch movies. However, did she want to be the jury chair? Cheung Man Yuk joked that if she took the job there would be no surprise!

In recent years Cheung Man Yuk has already returned her base to Hong Kong as she hoped to spend more time with her family. Last year after breaking up with her German architect boyfriend of 5 years Ole Scheeren, she has been single for 1 year already. She said that she only permitted herself 3 months of "empty window period" after the break up, but now she enjoys the joy of being single. Did her parents urge her to wed? She said that she was married and divorced.

Cheung Man Yuk as the Golden Horse 50 ambassador worked with director Hou Hsiao-Hsien and photographer Mark Lee Ping Bin on a 1 minute Golden Horse image commercial. They each have 5 Golden Horse awards. Cheung Man Yuk and Hou Hsiao-Hsien originally would have worked together on the film 1998 film FLOWERS OF SHANGHAI. At the time she just got married and had to move to French, she did not have time to learn Shanghainese and resigned. Hou Hsiao-Hsien joked that actually this problem could have been adjusted, like he turned Leung Chiu Wai's character Cantonese; she joked, "If I knew about that I would've taken it!"
Posted by hktopten at 2:58 PM