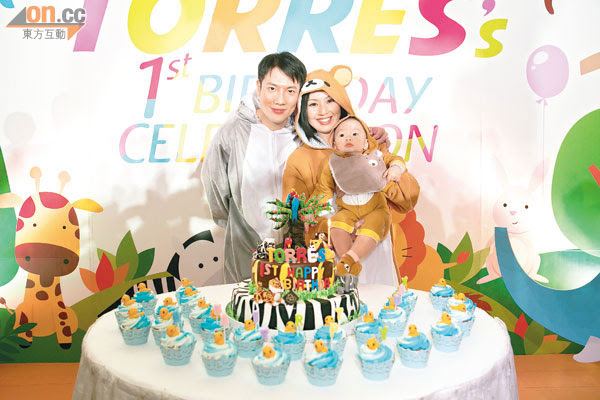 Miriam Yeung Chin Wa and Real Ting Chi Ko yesterday held a first birthday party for their son Torres at Admiralty. The party theme was animals. Most guests wore animal costumes. Chin Wa asked guests to donate to charity in lieu of gifts and would donate in her son's name to a special need school.

At the party, Chin Wa's family of three were dressed as an elephant and Rilakkuma. When asked why animal theme, Chin Wa explained, "Because he is a boy, animals have strong life force. A princess party would make no sense." Ting Chi Ko also praised for how well behaved his son was. After two hours of photos he still did not cry. Chin Wa said that originally they wanted an 100 day banquet but she was fat at the time and did not want to see anyone. She wanted her son to have a beautiful memory of his first birthday so she had this party. On her son's actual birthday she will have to work. She asked guests not to give gifts and donate the money instead to charity. This time the lucky money will be donated to special need schools. "The society has given me everything I have, now I want to share it with the society."

The party was buffet style, how much did they spent? Chin Wa said that a lot were sponsored. She also said that her son was only one and would not know what happened today. When he saw his parents dressed as animals he was frightened. "He would be frightened from me in heavy make up. In addition this time I realized how tough cosplay is. I sweat more today then from running the 10K." Ting Chi Ko's father has settled in Shanghai, Chin Wa felt that this was also a good opportunities for the in laws to meet. She even joked that the elders were spared from the animal costumes.

Ting Chi Ko's elementary school classmate Wilfred Lau Ho Lung yesterday attended alone and also appeared in a Rilakkuma costume like Chin Wa's. Lau Ho Lung said that girlfriend Joey Yung Cho Yi could not attend due to work, but they pooled their money for the charity laisee. As for how much, he joked, "I am not telling you to keep you guessing."
Posted by hktopten at 7:35 PM