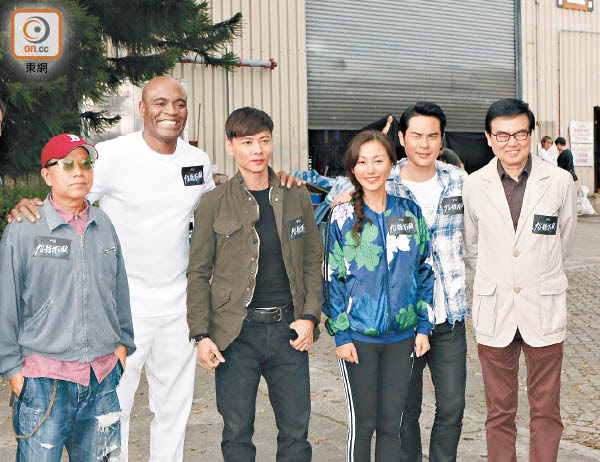 Two nights ago attending with her husband Paul Wong Koon Chung, Chu Yun rarely appeared in public lately. She revealed that last year she was buried in work and made three movies. The costume film even went to shoot on location in Lhasa, Tibet. As for the romantic film she worked with a "Young Fresh Meat" and for now she could not reveal anything; the third one, the horror film GOO JAT also challenged her limits. She performed the character from her 20s to her 60s and even needed special effect make up. Although her skin had some reaction, she felt that it was a lot of fun.

However, Chu Yun stopped making movies after having her daughter. She only returned five years later. She sad that she felt like she found her self worth again. "At work I can be Chu Yun again, at home I can be Mama and wife." Now that her daughter is four, would she like another? Chu Yun said, "In the short run I don't want to, in the long term I haven't had one yet. So I will leave it up to fate!"

Ng Chin Yu came straight from her Beijing flight. She revealed that she was working with Godfrey Gao on the new film THE LEGEND OF THE ANCIENT SWORD. In the film they had romantic scenes, but he was 1 meter 95 tall. He was as tall as a door. Chin Yu sad that she had to stand on a box when acting with him to not look like a dwarf. When they stared at each other she could only see his chin. She said that her character was a fairy and had to fly around. Later they will shoot a mid air kiss scene. She believed that in flight she would have an easy time with accommodating the height.

Lau Sum Yau two nights ago after the event rushed back to the set of the film DRAGON TATTOO in hopes of being able to finish before the Lunar New Year and get a few days off. Then she will work on her TVB series. Thus Sum Yau this year would not return to Taiwan for the Lunar New Year. She hoped that her family would be able to come to Hong Kong. She revealed that earlier since she had time off she already went to Tokyo for ten days to recharge. Mommy originally wanted to go on vacation during the Spring Festival, but Sum Yau had to prepare for the series so she could only promise to take her in the summer.

Zhang Jin attended alone as his wife Ada Choi Su Fun had to work on her TVB series. Speaking of all the fights in DRAGON TATTOO and his fight with MMA champion Anderson Silva, he said that Silva was 1 meter 90 tall and making his film debut so he thought that he would use all of his strength to knock over an opponent in the same manner. Thus before the performance they would properly communicate.

Kevin Cheng Ka Wing also attended two nights ago. Yesterday he was working on location in Macau on the film DRAGON TATTOO (GAU LUNG BUK BAI), but the local police took him to the headquarters to be investigated! In the film Ka Wing played a Macau cop. He was working on location as a plain clothes cop at the police headquarters, but because the Macau police did not know about this location shoot, Ka Wing was taken to the Headquarters to assist with the investigation.
Posted by hktopten at 8:20 PM