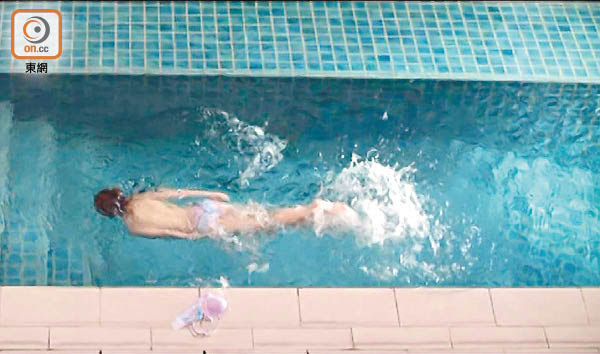 Larine not only bared all for a swimming but also got intimate with the tomboy Hedwig Tam Sin Yin. They not only whispered sweet nothing but also got intimate with arm around the shoulder. Larine even surprised her with a kiss. In another scene they shared a tight embrace. Speaking of baring her back, Larine admitted that was not embarrassing enough. "I took all the safety precaution. Daddy really took care of me, he was afraid that my acting would be affected and cleared the set. (Was the kiss with a girl awkward?) Yes, because I haven't kissed a girl before! However I lost out on the wide shot. Because we shot the close up first, the kiss wasn't passionate enough. Then we got a little more daring, the kiss was more precise on the wide shot." Tam Sin Yin said that the shoot was very comfortable. "Although I haven't had too many kiss scenes with guys, this time I was more comfortable with a girl. Maybe it's because I am a girl too!"

Ah Tan earlier appeared with Larine on Carol Cheng Yui Ling's radio program. 27 years ago they played a couple so this time could be considered a "family reunion" for the trio. Thus Ah Tan revealed as soon as he saw Do Do, "This girl was very nervous before. While waiting outside to see Ma, she suddenly said that she really had to go and ran into the men's room!"
Posted by hktopten at 9:58 PM