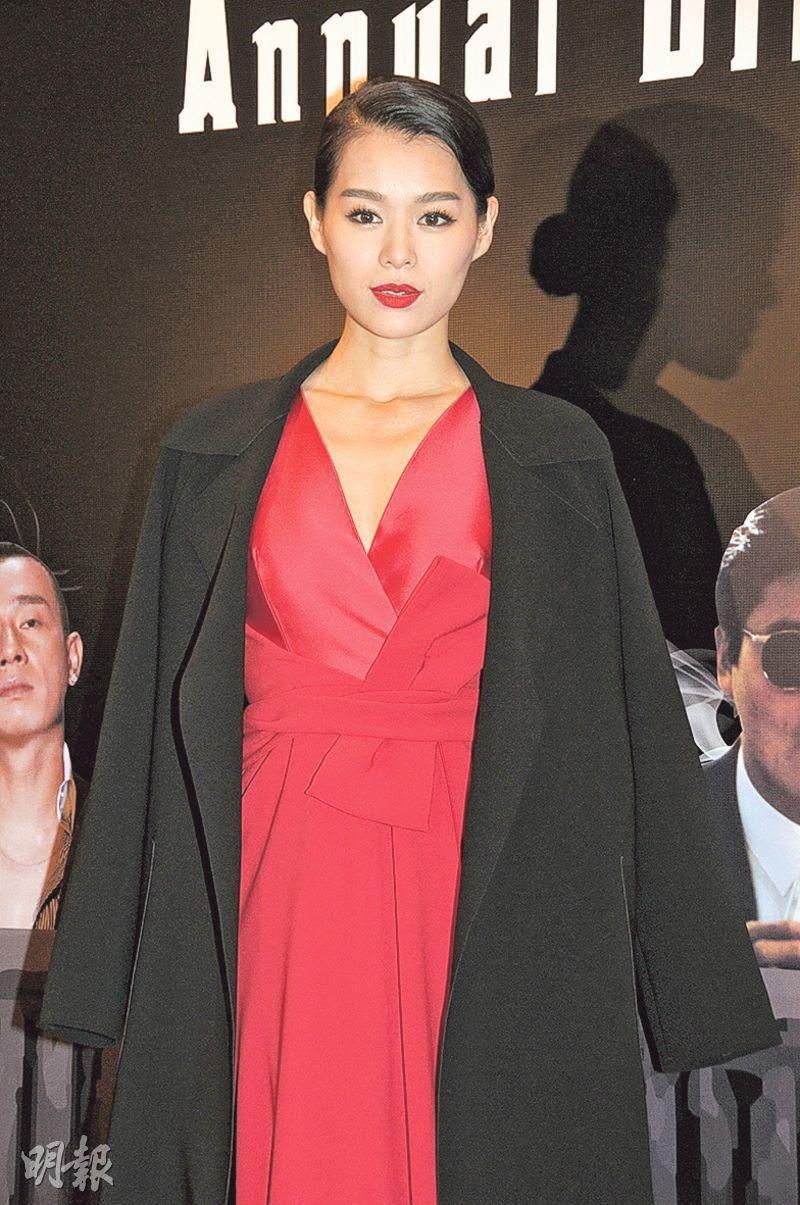 hmv Digital China Group chief Stephen Shiu Jr. last night led several dozen of his artists to attend the company's annual banquet, the dress code of which was mob film. Aside from announcing the group's future business direction and some of its production and distribution film projects, Justin Cheung Kin Sing also had a contract extension ceremony. One of the guests Myolie Wu Hung Yi paired her mob sister look with a red dress. She sad that she expected everyone would wear black so she deliberately wore red. She also said that this Lunar New Year she will stay in Hong Kong to give away lai see.

Julian Cheung Chi Lam, Wu Hung Yi, Chrissie Chau Sau Na, Joyce Cheng Yun Yi, Fiona Sit Hoi Kei, Lawrence Cheng Tan Shui, Shiga Lin Sze Nga, Stephanie Cheng Yung, and Louis Cheung Kai Chung were in attendance. Last year Hung Yi took a long vacation after getting married. During the Lunar New Year she was in England. This year will be the second year that Hung Yi would give away lai see. Since her mother in law will be in Hong Kong she will not go overseas during the Lunar New Year. She also prepared five figures for lai see.

Cheung Chi Lam appeared in a black leather jacket mobster look, but when he heard that he did not resemble a mob boss he said, "That's right, I am so mild mannered that I look like this no matter what I wear." Chilam revealed that when he got into the business he played a blond mobster in TO BE NUMBER ONE (GUM BONG TAI MING), which was quite convincing. He also said that he will work on the Nam Yin produced horror film SEUNG JOI NEI JOR YAU (ALWAYS AROUND YOU), a Hong Kong style ghost film. Chilam who rarely made this type of films said that he would enjoy it, as he would have his first murder and dismemberment scene. At first director Herman Yau Lai To suggested for Chilam to just brush over these horror scenes, later he asked to be "hardcore" deranged once and joked that it probably would be a lot of fun.

Chau Sau Na had tattoos on her sleeve. Sister Na revealed, "At age 19 I got a tattoo before my right ear, but after I got into the business I didn't dare to get more. Now I always have to come up with ways to hide the tattoo behind my ear with hairstyle during the shoot. I thought about laser removal, but I didn't after a friend said there would be scars." Earlier Sister Na covered her face with bandage like a mummy and posted the photo online. She explained that she had an allergic reaction. The doctor said that it was due to the climate change and her skin was too dry. Thus she had a "wet wrap therapy" to treat her face. She said, "The dryness has reached the top! (Would you get a man to nourish yourself a little?) Boyfriends can't protect you from climate changes, of course I still want someone to protect me." Speaking of Ho Pui Yu reportedly was upset that the company put all of its resources on Sister Na and left the company after her contract came to term, Sister Na denied that and felt that the company resources were evenly distributed.
Posted by hktopten at 6:50 AM