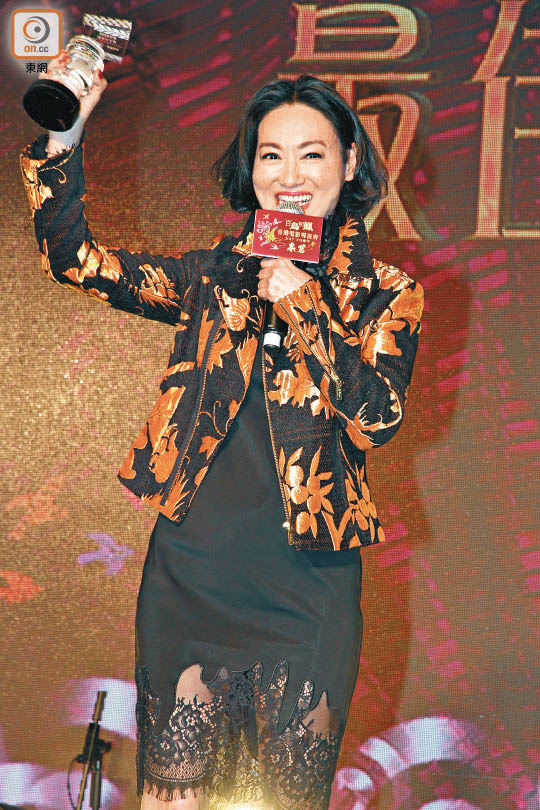 Last night the Guild presented 7 awards, Best Director went to Stephen Chow Sing Chi for MERMAID (MEI YUN YU) and Derek Tsang Kwok Cheung for SOUL MATE. Best Film went to TRIVISA (SHU DAI JIU FUNG), Best Actor to Gordon Lam Ka Tung, Best Actress to Kara Wai Ying Hung, Best New Actor to Tony Wu Tsz Tung, New Director to Wong Chun and Honorary Award to Michael Hui Koon Man. Lau Wai Keung said that although the film market was poor, he was still glad to see a flood of new comers. They as veterans would also like to pass the torch and help the younger generation. He said that he will communicate more with new comers and joked that then it will be easier to kick them into the club. Would he suggest for actors to take pay cuts to save the market? Lau Wai Keung said, "I have before, for example MAD WORLD (YUT LIM MO MING) only had a HK$ 2 million budget. I asked Yue Man Lok and (Eric) Tsang Chi Wai to help." As for Director Lau's plan this year, he revealed that he will make a costume comedy but was unable to reveal the cast list yet.

Lau Ka Ling said that she has been off since the Lunar New Year. Because later she will work on 3 new film, she will take the time to exercise and get into shape. She said, "One of them will be Tsui Hark's DETECTIVE DEE 3 with Mark Chao and Lin Gengxin." Will she have less time to be with her husband Tony Leung Chiu Wai? Ka Ling said, "He has to pay off his film debts too. He still hasn't finished last year's movies. Now he has to work on MONSTER HUNT 2 and PARIS RAIDERS. Each time he makes a movie he takes a long time. He definitely is very serious."

Best Actress Wai Ying Hung was teary eyed when she accepted the award. She admitted that she only came for the dinner. "I have hidden something inside for 40 years -- no director has ever complimented me before. I have suspected whether I didn't perform well enough, which made me lose self confidence. This award is like all the directors praising me, I got back my self confidence all at once." Siu Hung said that her hands were shaking when she accepted the award and her mind went blank. She said, "Actually I really need praise, even Mommy never praised me before. I minded the most for wanting praise from the directors because they are the leaders of films." Siu Hung also said that her Hong Kong Film Award confidence would not increase because of the award, as they were not the same thing. Best Actor Lam Ka Tung was just as emotional when he accepted the award. He said that in the past he watched people accept awards from the audience. "Being on the stage only takes a dozen seconds or so, but I have waited in the audience for 30 years. Thank you directors for giving me a chance. I am luckier than Sister Siu Hung. I never received praise from others, I only got yelled at." Ka Tung could not hide his emotions during his interview. He did not dare to think about his Hong Kong Film Award chances. "I am very touched, even when people yelled at me it wasn't out of ill will. Time can prove everything. This award means a lot, I really never thought about it before." Would he give the good news to his recovering mentor Andy Lau Tak Wa? Ka Tung said that he definitely would because he watched him grow up.