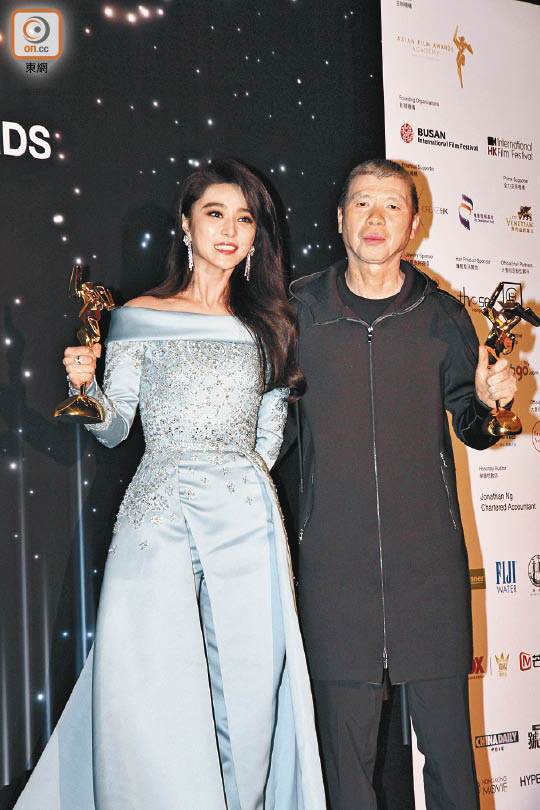 With over 30 films, Sammi Cheng Sau Man two nights ago received the 11th Asian Film Award excellence in Asian Cinema award. She said that after finding out that the event would present this award to her, she was not only grateful but also told herself to have the most humble heart in order to be able to carry the meaning and the weight behind this award. She also said that after calming down she no longer had the impulse to have a child immediately.

Sammi thanked each director who gave her a chance but felt that she was still far from excellent. She felt that veteran filmmakers who kept contributing to film were the real excellence in her heart. Sammi said that she really wanted to share the award with Johnnie To Kei Fung, Wai Ka Fai and Andy Lau Tak Wa. They were very important mentors on her film journey, permitting her to continue to dream with all the film workers in this "dream factory" of film and head toward her own dream.

Later Sammi admitted that the award was like a promise to the audience and to herself. Her range will have big breakthrough, so in the short run she would not work on romantic comedy. Sammi pointed out that in the next three films she would play interesting and a little difficult characters. "Thanks to the directors' trust, after SONG OF EVERLASTING REGRET I would have a starting point." She also said that for now she would not consider another film position because she did ont have the ability. As for having a baby, Sammi pointed out that even though she came in touch with it in film and thought it was pretty interesting, after a few days she changed her mind again. She sad that she could play with other people's babes, but after talking with her husband Andy Hui Chi On she calmed down and thought better of it. The current resources in the world and the Hong Kong educational system frightened her so she changed her mind; she also realized that she had to remain alert on film shoots.

Close to To Sir, Lam Suet two nights ago with TRIVISA (SHU DAI JIU FUNG) won Best Supporting Actor. On the stage she said that each time he has been nominated he has returned empty handed. Thus this time before hand he did not prepare, but he thanked To Sir for always supporting him.

The Best Actor, HARMONIUM's Japanese star Tadanobu Asano, took a step further after winning Best Supporting Actor last year. He stated that he was in good spirits and even hoped that next time he would be able to win again. In the future he will be busy with television series and movies. The Best Actress, I AM NOT MADAME BOVARY's Mainland star Fan Bingbing, said her award as well as the film's Best Film and Best Cinematography awards truly were the best birthday presents for Director Feng Xiaogang. She also said that 12 years ago when she first worked with Director Feng she already won an award. However, "Lord Fan" did not give boyfriend Li Chen the good news right away because her phone had no signal inside the venue. She had to wait until later to notify him.
Posted by hktopten at 7:18 PM