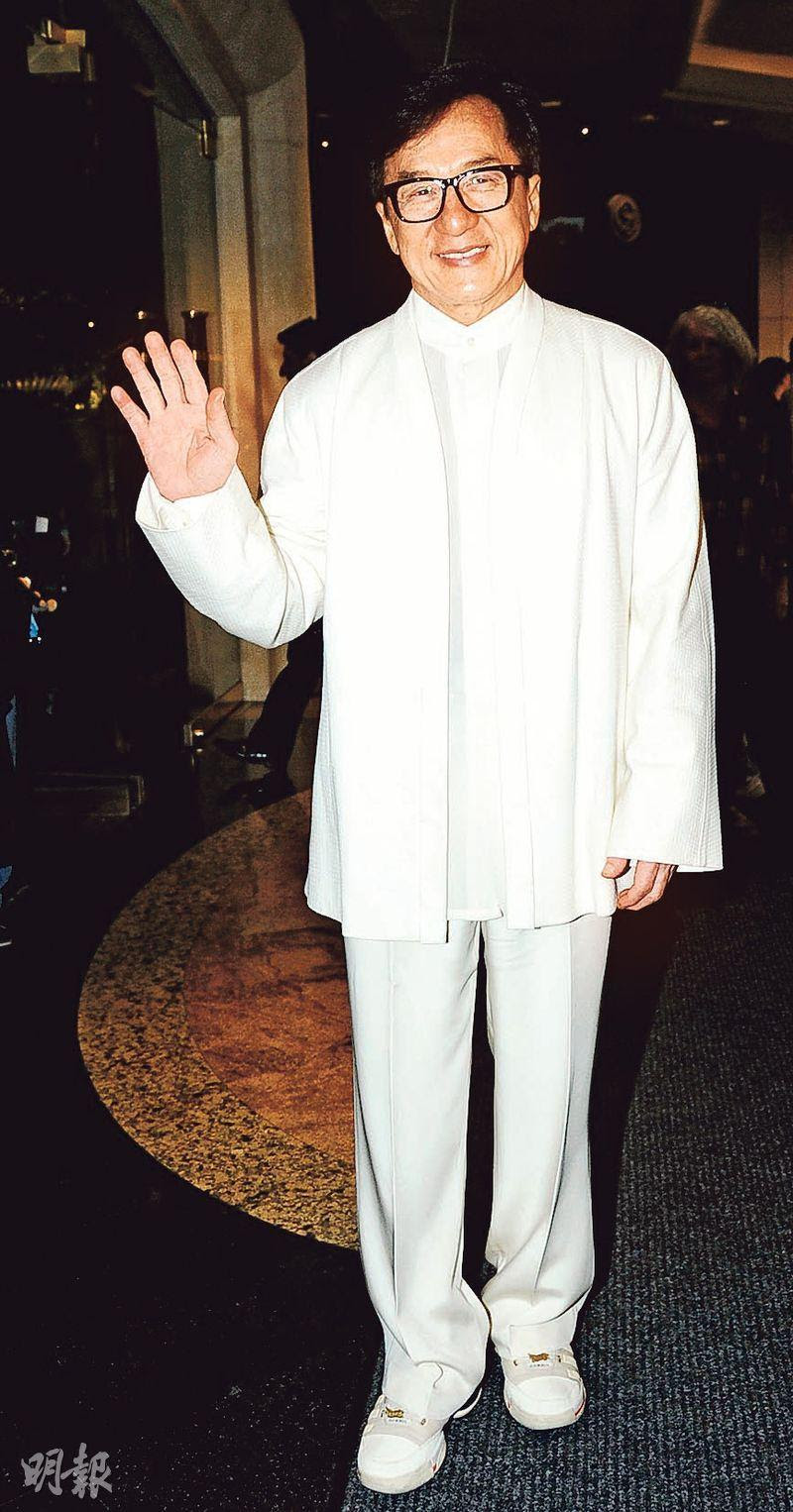 Although he was the guest of honor, Bg Brother was the earliest to arrive. He complied with the media's request and appeared for an interview. Did his friend Albert Yeung Sau Sing organize this celebration for him? Jackie Chan said, "Yes, earlier from when I received the Oscar nomination to winning it, Mr. Yeung already kept congratulating me. I just wanted to keep a low profile so others wouldn't say I was showing off. So Mr. Yeung said that I kept turning him down with wanting to keep a low profile, this time I really couldn't turn him down."

Big Brother revealed that three people including Tsang Chi Wai started the event and asked Big Brother's friends in the business to attend. Many were friends he did not seen so often, perhaps after this time he might not see them for awhile. Thus using the Oscar as an excuse he actually wanted to see a group of old friends. He said, "I really don't know how many guests were invited. Everyone said they would be a surprise, but I knew already!"

Would his wife Joan Lin and son Jaycee Chan come? Big Brother said, "I didn't ask them to, earlier they watched the Oscars everyday. They are tired of it. I didn't bring the award as it is on display at the Beijing office. Later it will be stored at the Shanghai Jackie Chan museum." His friends actually "smuggled" the award to Hong Kong to surprise Big Brother.

Speaking of friends who rushed back from overseas like Lau Ka Ling and Nicholas Tse Ting, Big Brother said that he knew. Earlier when he saw director Teddy Chan Tak Sum, he played coy and told him he would not come. As for special segments at the dinner, Big Brother said, "None, thank you Mr. Yeung. He has been a good friend of mine for over 40 years. When I won he was happier than me. Since I came back for a few days for voice work this party came together." Did his wife and son congratulate him when the Lifetime Achievement Oscar was presented? Big Brother said, "No, they have always been very cool. Cho Ming didn't call to congratulate me, and I wouldn't be mad. Actually on the night of the award, I already had dinner with Stallone."

In addition, earlier at the Hong Kong AIDS Foundation charity dinner a woman donated US$ 300,000 to be in Jackie Chan and Stallone's movie. Big Brother said that he would arrange for her to be in a scene, maybe she would play a driver. He also invited her to attend the premieres in the U.S. and Beijing.

Recently Elaine Ng Yi Lei's daughter called the police and Ng Yi Lei was accused of felony intimidation. Jackie Chan was asked about the incident but he kept his smile. "What's up? What's up? Thank you everyone!" Then he went to the dinner.

Cheung Hok Yau arrived alone around 6:45PM. When he stopped for media photos, reporters told him that Aaron Kwok Fu Sing will soon wed. Would Hok Yau congratulate him? Hok Yau said, "Of course I would, should I be mad at him instead? Actually it's about time!" What gift did Hok Yau bring for Jackie Chan? He said that Big Brother did not want any gift. Would he sing? Hok Yau said that he would not because he just returned from a Mainland tour. He came to congratulate him for a little then he would leave. Tomorrow he will return to the Mainland to continue his tour. Why was his wife May Lo not with him? Hok Yau said, "What happened, why did you ask that question? You know she wouldn't come, when have you seen she did?"

Wong Chau Sun congratulated Jackie Chan on the award. Did he admire Big Brother very much? Chau Sun said, "I should, he is so hard working, very amazing! Now I have to hurry and get in, to 'grab jobs' from the directors!"

Tse Ting Fung arrived at 7PM. He admitted that he did not prepare any gift but of course he was happy for Big Brother. Ting Fung said, "We are proud of him, for stepping on the international stage and accepting such a representative award." Was Big Brother his goal? Ting Fung said, "I am not even qualified to think about that!" Would he want a chance to work on Hollywood films? Ting Fung said, "I will leave that up to fate. We have a lot of good work too." He also said that he did not know what kind of performance the dinner would have. He would not sing.

Reporters said that earlier at the karaoke box his performance of BLUE RAIN was great. Ting Fung said, "I did braise pork belly Braised in Southern fermented tofu (blue rain homophone)." As for fans looking forward to his concerts, Ting Fung said, "I know, as soon as possible!"
Posted by hktopten at 6:56 PM