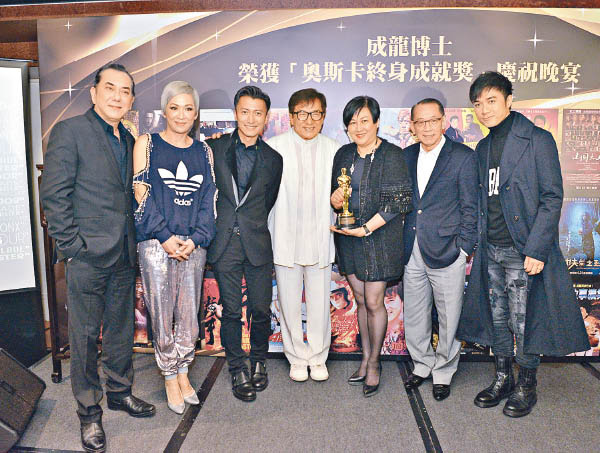 Jackie Chan last year received the Lifetime Achievement Oscar. Two nights ago Emperor boss Albert Yeung Sau Sing held a celebration. Jackie Chan thus caught up with friends of several decades. He also personally edited a video to thank everyone. He and his wife Joan Lin rewrote the lyrics in the videos and moved 70% the guests to tears. Friends even promised to meet once every year.

Jackie Chan and Yeung Sau Sing left around 11PM. Jackie Chan revealed that he made a video to thank everyone. "It's my own song. Actually it was for the Jackie Chan Stuntman Association's 40th anniversary. I changed the lyrics, then Sister Giu (wife Joan Lin) changed them again. Today everyone was very touched from hearing it because all the friends have known each other for 35 if not 40 years. The most regrettable is Willie Chan is ailing and unable to attend. At the dinner, they suggested that show business has to get together once whether anyone wins an award or not. Next year maybe Ms. Fong (Mona Fong Yat Wa) and (Peter) Lam Ngok Kin will organize it." Jackie Chan also said that originally this time would raise fund for show business, but due to the tight schedule they were unable to.

Eric Tsang Chi Wai was the host. When he left he was still sober. He said, "I have to go to the airport right away, I have to fly to make Chin Kar Lok's movie." Speaking of the evening, Chi Wai said, "It's very touching, 70% of the people cried. I cried very early on because three videos were shown. The first was Jackie Chan's charity work over the years. The second was foreigners' praises of his Oscar. The third was Jackie Chan's personal edit to thank the guests. He isn't glorifying his individual contribution. What touches me the most is such a famous artist is willing to use the remaining time to do something that influences the entire world and community, for more people to know Hong Kong, China, kung fu and Chinese people. Over the past 30 years he has been to countless places, done a lot of charity work, promoted kung fu, built many schools, scholarships, including the Performing Art Academy and Lingnan University. He did everything in a low key manner, he never talked about how great he was. He kept silently contributing. Jackie Chan and I grew up together. Because he was called Big Nose, I used to call him 'Nose'. Yet after watching this video I called him 'Big Brother' because he has never stopped doing good deeds."
Posted by hktopten at 8:20 PM