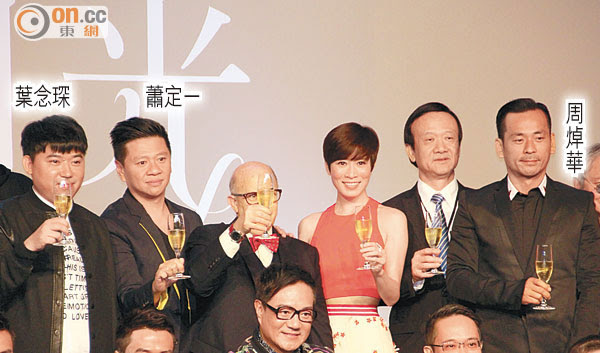 Chiao-En played a dumb mute in the film, the first time she had such a role. She had to act with sign language. She admitted that at first she was very worried, luckily before the shoot she had an instructor to teach her. Chi Lam described her as a genius because she only needed a few minutes to learn sign language. Even if the director changed the dialogue on the spot she could immediately interpret it in sign language. This time the film not only had the original television series team but also added Chiao-En. Because she did not have time until the end of March for the production, the team had to stop to wait for her. Chi Lam however that she was worth the wait. In the film he and Chiao-En also had a romance, but it would not be too passionate. He said, "She in the film had to communicate with sign language, thus everyone had to be more oppressed in the relationship."

Sister Ka Yin said that she kept pushing Tong Man Lung to court Ah Sheh. Tong Man Lung said that 15 years ago during the television series Ah Sheh already had many suitors, but he stressed that he never pursued her. They were just friends. He also revealed that Ah Sheh once dated his friends. He did not revealed who he was though.

In addition, Ah Sheh recently has been rumored to be at odds with friend Catherine Chau Ka Yi. Later Ka Yin visited Ah Sheh on the set in Macau, the rumor was dispelled. Ah Sheh said, "Her recent series is popular, when she is popular she would have news. Yet I hope it's not untrue reports because they would destroy our relationship."
Posted by hktopten at 2:40 PM